There was unexpected news yesterday as the Hat Trick 2: Playing the Rebound paperback edition became available early. It was slated for release at the end of October, and that’s still it’s official release date, but it’s now available from Amazon and JMS Books (more retailers will be added over the coming weeks as well). This paperback edition includes Hat Trick Overtime: A Classic Winter’s Night as a bonus. I’m thrilled the second book in the Hat Trick series is in paperback, and even more that it has the bonus short story in it.

Keep an eye out for news of a couple paperback giveaways in the near future.

Hat Trick 2.5 & 3
Work is in progress on the next two Hat Trick stories. I’m targeting a January 2015 release for another short story installment, with the working title of Hat Trick Overtime: Summer Camp. Yes, Simon and Alex are off to summer camp. I wanted to pull them away from school and the regular team environment their usually in, and give them some where new to be. They’re spending a month at a hockey camp as coaches for teens. They’ll also have to deal with another coach who has designs on splitting the couple up. This story will likely be a little longer than A Classic Winter’s Night was, but it won’t be novel length either.

Hat Trick 3: Penalty Shot is also in progress and mostly likely headed for a summer 2015 release. For Penalty Shot, the boys are in their senior year at Michigan. As they prep for their last hockey season, they get approached by a gay goalie, who can’t get a spot on a youth team, to coach a team that he’ll put together. Besides the goalie, a couple of the people who end up on the team tell their own story throughout the book. Simon and Alex will also face their biggest challenge yet. I’m not giving away any hints on this yet, so you’ll have to check in for more updates. 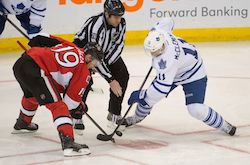 Rivals was the first short story of mine that ever became an ebook, although it was the second I signed a contract on. Rivals ended it’s initial run with Dreamspinner Press last year and I’m excited to report that it looks like it will make a return this holiday season, which is appropriate since the story takes place over Thanksgiving and Christmas.  Here’s a look at the tentative version of the new blurb:

Mitchell Turner and Alex Goodman squared off over a face-off dot throughout high school. Their schools were cross-country rivals. Those face-offs were tough on Mitchell because he harbored a huge crush on Alex. High school, and college, are behind the guys  and they meet unexpectedly on Thanksgiving Day. Alex asks Mitchell out for coffee to catch up. Could this be the start of something magical for the holidays?

The blurb isn’t the only thing new. I’ve been reviewing the story a bit, make some finite tweaks, as well as putting a scene into it that I’d originally cut for length considerations.

It’s been interesting revisiting the story. There are parts that are reflective of Hat Trick–two high school players with secrets, one names Alex (yes, it’s a favorite name of mine) and some elements of the coffee date. In some ways this was part of the foundation from which Hat Trick was built.

I’ll have much  news on Rivals in the coming weeks as I submit it and get the final details on it’s new publishing squared away.

Random News
As you can see the website’s been updated significantly. Will and I decided to give the entire JeffAndWill.com an overhaul, and with that Jeff Adams Writes got a new look too and some new features that will let me keep everyone updated book news, and let you get in touch with me (see the new email form, for example).