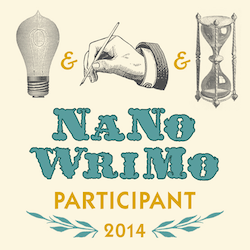 On Saturday, on schedule, I rolled past the 25,000 word mark for NaNoWriMo 2014 (you can see the graph of how I’m doing day to day here). I made some realizations as I was writing last week, especially on Saturday and Sunday.

First, and most important, I do love writing in the Hat Trick universe. Despite the fact that I’ve got some stories I’m looking forward to writing in 2015 that are not Hat Trick related, I love these characters, certainly the ones that have been around since the start, like Simon, Alex and Leo, but also new ones like Danny and Trent that showed up in book two, and the new cast that are key to book three. I’m not sure what this means for the series beyond the third novel, but I’m churning out scenes that I love every day.

When I started NaNo at the beginning of the month, Hat Trick 3 already had 35,200 words written. It’s now over 62k and still growing, putting it on track to be as long–maybe longer–than the original. I’m okay with the length if it’s what’s needed to tell the story.

Here’s the problem: I’m pretty sure the way I’m telling the story is wrong. I gave voice to three new characters in HT3. They’re a group of diverse teens who intersect with Simon and Alex. The plan was to let those characters tell their story in their POV and Simon would continue to have his POV too. Each of the four characters would take a different chapter and they’d rotate. Despite liking what I’ve been writing scene-to-scene, the more I consider what’s going on here, the less I think it works. Simon’s becoming too diluted. Since all the other Hat Trick to date have been Simon telling the story, I think this is the wrong place to use rotating POV.

So moving on from here, I’m going to finish the scene I’m writing, which happens to be in a different person’s POV and then the rest of the story is going to be all Simon all the time. Once I’m done with the draft, I’ll go back and swap out scenes to put them into Simon’s POV. These new characters won’t get lost, but they’ll be shown through Simon’s eyes. These characters could  become ones that get their own books later–I’ve gotten requests to show more of Leo & Matt and Jakob & Milo, and now these new characters could also be candidates for spin offs at a later date.

So that’s the update at the halfway mark of NaNo. I’m confident that HT3 either gets finished by the end of the month, or near it. I’m sure I’ll have the 50k word count, it’s just a matter of seeing if that finishes the book or if there’s more to tell the story in its entirety.