Welcome back to Flash Fiction Friday! After taking November off for NaNoWriMo, the feature is back. This morning I posted a story to FFF #10, which I didn’t complete on time since I couldn’t balance NaNo and FFF effectively. So you can hop over to that post and see the story I wrote for those not-so-nice cards. Also while FFF was on break, the story I wrote as a submission to The First Line was rejected, so that story, “Stars,” is posted as well. If you missed any stories, you can also catch up at the FFF Library.

Here’s what the Storymatic Cards had in store for this week: 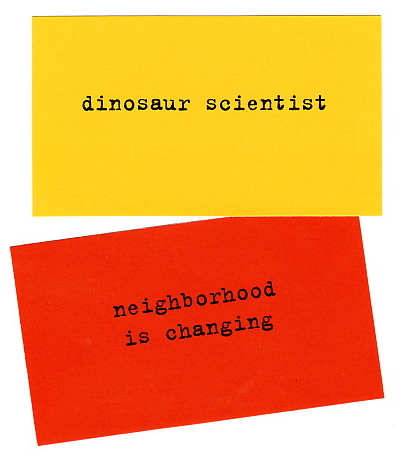 I have to say the first thing that came to mind was Ross from Friends, a clear sign I’ve been watching too many reruns on TBS lately. The story will not include Ross, I promise.

Come back next Friday to see where this goes. If you want to take the challenge yourself write the story, and post it on your site and leave the URL in the comments section.

This was not as difficult as the previous challenge, but it wasn’t exactly easy either. Here’s what I came up with:

The backyard was completely dug up and I was satisfied with the piles of dirt, but not with how little we’d found. The museum sent me over when the swimming pool excavation found what appeared to be some fossils. Truth be told, as soon as police forensics figured out the bones weren’t human, the homeowners brought in the natural history museum. I don’t think they would’ve done that if their ten-year-old son wasn’t on a dino kick.

The bones were dino bones, specifically a stegosaurus. All the tests verified that and the news spurred the parents on to do a full dig back here. Unfortunately, nothing else has come up despite the our best efforts. It didn’t add up that just two bones would’ve turned up here.

I held the larger of the bones we’d found in my hands as I squatted on the edge of the patio, which was one edge of the primary dig zone, which had borders east and west with neighbor’s property and to the north with a tree line that extended back into a wooded area.

We did not want to go digging up the woods without some indication that we might find something to make it worth our time. It was one thing to dig up a backyard that was already being renovated. It was another, much more costly endeavor, to go into the woods—not only in terms of the dig itself, but getting permits to do it.

There were no records at the museum of other digs in this area. If there’d been a find here before, the museum should know about it since it’s existed in one form or another for nearly a hundred fifty years. The records on findings around the U.S., and especially in Connecticut, were vast.

“Doctor Clark?” It was Marcus, one of the museum’s chief researchers. “Are you here?” He called out from the side yard, where we’d also performed a small dig.

“In the back,” I called out. I stood and replaced the fossil on the table where we’d been keeping them. A couple of university grad students were sifting through some freshly dug earth at one of the stations we’d set up over by the fence that ran along the west side of the half acre property.

“I tried you on your cell earlier,” Marcus said as he came up to me, “but it kept rolling to voice mail.”

I pulled the phone from my pocket and discovered that I’d turned it off at some point. I usually kept it off when I was working, in an effort to avoid distractions. I also, unfortunately, tended to forget to turn it back on.

“Sorry about that,” I said, reactivating it. “You look like you’ve found something.”

“I may have solved the mystery,” he said, pulling out an iPad from his satchel. “Seventy-five years ago the land we’re standing on, plus roughly half of this subdivision was owned by Joseph Miller.”

“As in former head of anthropology at the museum?”

Marcus nodded. “He had a sprawling house, plus a laboratory space. It’s very possible those are from his collection, or something that he was analyzing here and lost years ago.” He showed me the tablet and swiped through a sequence of pictures. “This property was in his family for years. But when he died unexpectedly in 1942, his brothers swooped in and took it over. He’d left no will that covered what to do with any artifacts, materials, papers or anything else in the lab. The family wouldn’t even let the museum in to try to collect what might be theirs because they were worried they might try to declare the land historic or something since he was prominent in the field. The photos show that within five years the lab was gone from the property, and within ten so was his house because the property was sold to a developer. The brothers knew they had prime real estate and they sold it for millions. In the fifties a housing development went up here, but was destroyed in the early seventies by a fire. By the eighties most of the homes you see now were built, although some, like the one on this lot, were torn down again and rebuilt within the last ten or fifteen years.”

“If it’s something that was just tossed aside, it would easily explain why this was where it would be dug up by a pool excavation,” I said, taking Marcus’ tablet and flipping through the images again. “So the neighborhood as changed up a couple times and it’s unlikely anyone living here now knew him then. Even with a couple construction projects here for homes, it’s easy to imagine the bones staying hidden until the pool construction happened.”

“The kid that lives here is going to be so disappointed,” Marcus said. “He really wanted to find a whole dinosaur here.”

“I think we’ll leave him these,” I said. “I realize they may actually belong to the museum collection, but we haven’t missed these for decades, might as well leave him something.”

“Are you going to talk to him?”

“Yeah. I’ll let him know what was here. You never know, he may get some of the kids to dig around in another backyard and find more. It’s what I would’ve done at his age.”

“I’m just glad we solved the mystery,” Marcus said, as he started packing up some of the stuff from the main table we’d set up. “I’ll tell those guys to start packing as well.” He gestured to the students.

I heard a car pull into to the drive around front. My watch said it was nearly four, so that would be Mrs. Tucker and Stephen getting home from school.

“I might as well go talk to them now. I’m sure Mr. and Mrs. Tucker will be glad to get back to their pool build here rather than just having a giant sand box.”