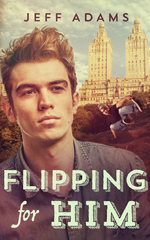 It’s been an interesting month as I embarked on a self publishing adventure.

Coming into the start of the year, I knew I wanted to get a body of work out in the first quarter of the year. I liked the split that I planned–a re-release (Rivals), a new installment in the Hat Trick series and something completely new (Flipping for Him).

FFH‘s origins date back to October 2012 (you can see it’s initial mention here). In the past couple years, I’ve dabbled on this manuscript in between Hat Trick installments. Since I was having issues with the HT3 story, I decided to finish the story of Kevin and Shin and release it to the world.

Many things were different in the creation of this book. Perhaps most importantly, it’s the first time in a couple years that I’ve done anything longer than 15,000 words that wasn’t part of the Hat Trick universe. As much as I love Simon and Alex, it was fun to inhabit different characters for a while. I also went third person here, which is something I rarely do. I enjoy reading first person-told stories, and I also enjoy writing them. But taking a different approach here seemed to work well.

Since this was self-published, I had to deal with my own cover creation. Yes, when I work with publishers, I suggest things and collaborate with them. However, this one was all on me. As I mentioned in a previous post, I loved working through the 99Designs.com process. I got a cover that looks awesome, and it not only serves the story but looks good alongside my other covers.

Editing was something I worried about a little bit since I wouldn’t have that one last look from a publisher, but ultimately that was covered, too. And pretty well as far as I can tell in the early response. I’m sure there are errors in there somewhere, there always are no matter who publishes the book because we humans are not perfect. But, I feel good about what I put out there.

The scary part of the process for me, even though I’m a bit of a techy, was compiling the final files. I’d heard horror stories. I’d read a few how-tos. Ultimately it was Scrivener to the rescue. It was super easy in there. Just select the file I was creating (mobi, epub, etc) and compile it. I figured out how to make sure the cover was included when it needed to be, and how to leave it out when it wasn’t. I got it to format my chapter headings right and do some customized text to start the chapters. I spent probably a half-day sorting out and checking files, but that was okay. Plus, the next time I do this, it’ll be much easier. In fact, learning all this about Scrivener will make creating pdf excerpts, or ARCs easier going forward.

Getting the files up was another learning experience. Each outlet does it a bit differently. I put it up first on Amazon since that’s the big one and that went pretty smooth getting my account set up and uploading everything. I also uploaded quickly to Kobo and Smashwords (which I’m using to distribute also to iBook and other outlets). Kobo was simple. Smashwords was simple too, although my learning here was to start earlier. I’d wanted to get the book on pre-order starting February 13 to release on the 18th. I did that for Amazon and Kobo. Smashwords however wants 10 days before an pre-order date to get it shipped to all the distributors. Oops. The book went on sale on the 18th through Smashwords outlets because I manually changed the date, but for a while the pre-order was set for the 22nd. I also uploaded to All Romance, which was also easy after a brief wait for my publisher account to be approved.

Barnes and Noble/NOOK was a different matter. Uploading there was the most difficult of them all. I could’ve let Smashwords distribute to BN, but my research said it was better to upload directly. Their interface is the most clunky, which I think is the result of it actually trying to be more helpful. It also took an extended period to get my publisher account setup. Every other outlet was done within a matter of hours (and usually minutes), BN took days. I entered my data on February 12, but wasn’t authorized until February 17. Then I somehow didn’t manage to hit the publish button correctly (or cancelled it somehow), so the book still isn’t up. I think I’ve corrected this and hopefully the book will go on sale at bn.com sometime this weekend.

The upside is, I’ve got all the accounts set up now and know the quirks of each so the next time out will be much easier.

The next hurdle is to format for Createspace so that Flipping for Him is available in paperback. I’d like to have those done within the next couple months so I can take them to Rainbow Book Fair in NYC.

The response to FFH has been great. It started climbing up Amazon during pre-sale and in it’s first few days of release it hit #1 on Amazon UK’s Gay YA chart… it’s been in the top 10 on Amazon US’ Gay YA Chart … it’s been top 15 on All Romance’s YA chart. I’m thrilled with that. On the Amazon US chart, the fact that I briefly sat one spot above Two Boys Kissing by David Levithan and three spots down from Levithan’s Boy Meets Boy was both surreal and awesome. More accurately I was kind of bouncing off the walls with these chart positions, and I screen grabbed some key ones (you can click on that image to see a slightly larger, clearer version). 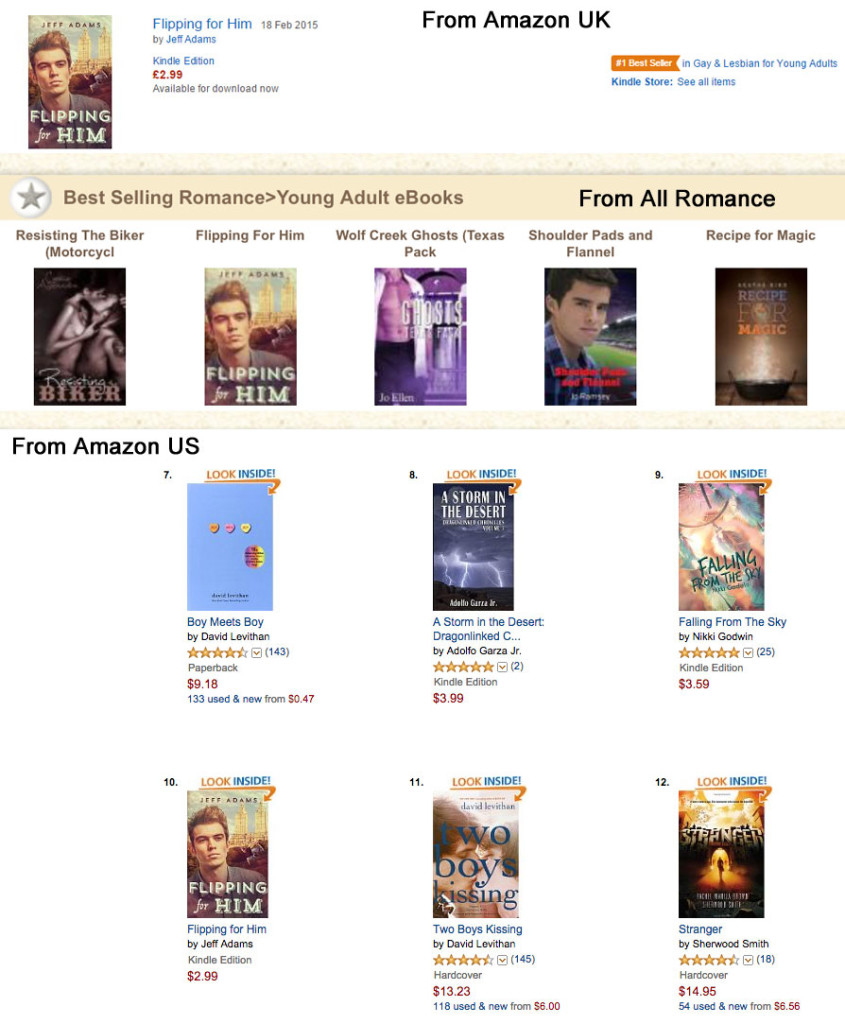 More importantly the response from readers, post in the initial reviews on Goodreads  as well as some personal messages, has made me quite happy.

Meanwhile, this week I’m already back into the Hat Trick 3 world, which I’m not leaving again until that’s done. I’ve got the story issues worked out via some plotting I did while working on FFH and the direction is clear for it once again. It’s good to be back “home” with Simon.

Thanks to everyone–the readers and the team that helped me publish this–for an amazing experience as a first time self publisher.