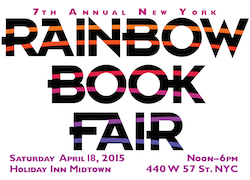 I had a great time at Rainbow book Fair last weekend. It was quite different being an exhibitor instead of an attendee. It was also a different experience than either Rainbow Con or GRL, which was good because I learned some things as a result.

One of the best things of the day was the people I was neighbors with. Bob Glasscock, creator of Casey at the Bat comic as well as my longtime Tigers hockey team captain, shared a table with me. It made us a sports table between Casey and Hat Trick. Next to us was Misplaced Affection author Wade Kelly and on the other side of her was Sara York, author of A Southern Thing series. Jason Frazier, the voice over artist who works with all three of us was on hand, too. It was a great group of people to spend six hours with. Wade came prepared with a prize wheel and it was cool having some of my books up there for attendees to win. 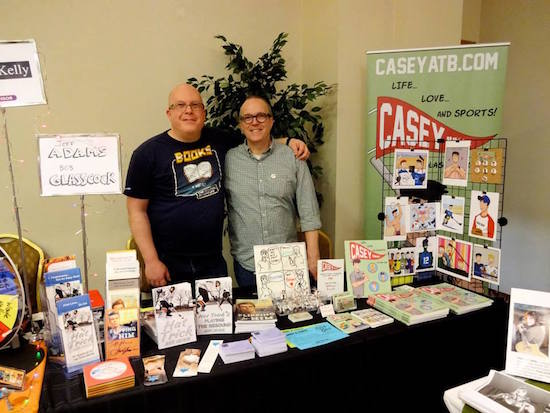 The most exciting, and scariest, part of the day was reading from Hat Trick. I’ve done one other reading, at Rainbow Con last year. Despite the RC reading being longer, this one made me more nervous because it was a reading in NYC. Yes, it sounds silly, but to get to read from my debut novel in New York City was colossally huge for me. Here’s the video replay (thanks to Jason’s husband Eliot for shooting the video).

There were lots of people at the fair. There usually is, but my perception of it was a lot different behind the table. I enjoyed talking with the many people who stopped by the table. I got to catch up with some people I’d seen at Rainbow Con and GRL, plus I got to meet some new people who read my books–usually Hat Trick. It’s awesome meeting fans! I got to talk to a lot of people who were new to my books, which was enjoyable. Hopefully they find something that they enjoy. Here’s a look at the crowd from my corner of the room. 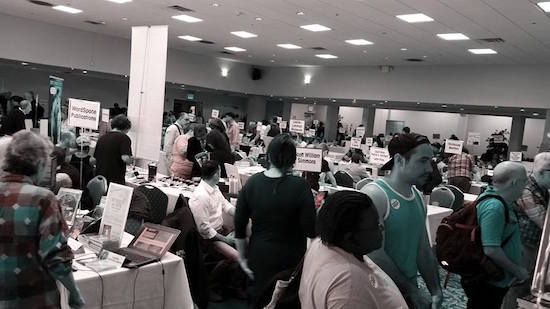 What did I learn at RBF? I need to hone my verbal blurb for each of my books so I can give it better. I also need to have better signage to let people know what on the table is FREE so that it’s clear what can just be picked up and taken so they can check things out on their own. It’s all about making it easy for people to discover what I do. I’ve got a few months until GRL, so I’ll be thinking a lot about that between now and then.

I also need to make sure to get around the fair more. I made one tour through the room, but I should’ve maybe taken a second one just to see more of what was out there. I enjoyed talking to the people I did, but it would’ve been great to network a little bit more. I could’ve done that at the after party, but it was a little too crowded for my comfort (plus I was compelled to get on my way to catch the first of my NYC Theatre Binge shows).

I did get some great catch up time with Wade as we had breakfast Saturday and Sunday morning. I got good coffee chat it with Tammy Middleton and Crystal Marie, which was also excellent! I wished I’d talked more with Sara.

All in all it was worth the trip across the country for the event. I might even take the plunge on it again next year, especially if I’ve got some new work out to showcase.