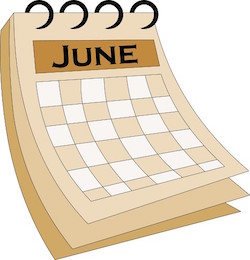 Hot Book for Summer: A new short story, or maybe its a novella at just over 18,000 words, is coming form JMS Books in August. I’ll put up a chapter one sneak peek soon (my mailing list will get first dibs at reading it, so if you want in the first look, sign up to be on the list at the top of the right column). The new story is set in and around the University of Alabama during a hot summer. You’ll get to meet grad student Ethan who’s none to pleased to be in the heat… but he just might end up with a boyfriend by the time the heat breaks. It’s a steamy story for a steamy time of year.

The story was a fun one to write, too. I’ve never set a story in Alabama before, much less in and around Tuscaloosa. It was fun to put some favorite places in there, as well as tipping my hat to a place from my childhood.

HT3 Continues: June is all about working on Hat Trick 3. It’s already 70k+ words and, provided I’ve planned correctly, I’ve got a dozen scenes to write and then go through the entire manuscript to ensure it holds together. I want the draft done in June so I can spend July working with beta readers on it before it gets turned in at the end of the month. I’m gunning for a September release.

This installment is proving to be a challenge. I got over ambitious in the initial plotting and didn’t realize it until I’d written way too many words. If you’ll recall I mentioned a couple months back that I trashed thousands of words in an effort to get this back to a cohesive story where the focus was on Simon’s story, most particularly his relationship with Alex. So far I like how it’s shaping up. More than anything I want to do right by Simon!

Sadly, Sean is someone whose been left on the cutting room floor. I like the story he was setting out to tell, but it just can’t fit inside HT3. I’ve got all of his words stored and I’m thinking his story may come to late in 2016. It wouldn’t be a Hat Trick novel because it would be Sean’s story, but it’s possible it would sit inside the HT universe because he works well with Simon. We’ll see how I feel about that after I think about it for a few months.

FFH Audio is Coming: Production on the Flipping for Him audiobook is running a bit behind, but it’s moving along. If you haven’t taken the moment to sample the first five minutes of chapter one, you can check that out. I’m very happy with it. It was awesome hearing a pro bring life to those words. As soon as we have a set date, I’ll let everyone know. Plus I’m sure I’ll have a copy or two to give away as well!

What Happened to Untitled? In middle April I posted a sneak peek of a story, which now has a title of A Sound Beginning. The story of Harry and Diego doesn’t have a release date, but it’s not forgotten. It’ll be along in due course.