I don’t think I’ve had a single month in my publishing career that’s been as busy, and awesome, as July 2015. Check out this stuff that happened: 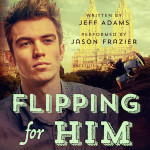 Flipping for Him Audiobook: After a few months in production, the Flipping for Him audiobook, performed by Jason Frazier, went on sale July 21 (you can download on Amazon, Audible and iTunes). I love Jason’s read on it. His voices for Kevin, Shin, Marshall, X and Quan are great. He really brings the story to life even more than I expected. The initial reviews on Audible are good too, which is icing on the cake. I’m happy how my first audio book turned out. I’m hoping that one day (and I truly don’t know when), I’ll have the Hat Trick books turned into audiobooks.

A Sound Beginning gets a contract: I started shopping this short in May and it found a home this month with Pride Publishing, one of the new imprints form Totally Bound. I’ve heard great things about Totally Bound over the years and I’m excited to work with them. This story, featuring voice artist Harry and contractor Diego, is scheduled to be available on Totally Bound’s site starting February 9 and then go wide on March 8. Of course there’ll be many more details as the release date approaches. You can, however, check out the very first sneak preview I posted for a look at the opening scene.

Hat Trick 3: Penalty Shot ready to go: The gem of the month was finishing up Hat Trick 3: Penalty Shot. As I’ve written about previously, this has been the most challenging of the novels to write for a myriad of reasons. It went off to the publisher and I signed the contract for it just a few days ago. I’m happy that the beta readers liked it (I know I made at least one of them cry, which I think is good). I’ve seen the cover and I absolutely love it. In fact, if you come back on Monday you can see it right here for yourself. It was a  long month of editing, but worth it. HT3 will release in September.

Christmas in July: While I was working on the HT3 edits, I also wrote a holiday story. Hotel Holiday Hookup (which I love as a title because it has “Ho Ho Ho” in it) is a quickie story about Marty, an IT consultant who has to be away from home during Christmas. His present, however, may just be the hot assistant manager at his hotel. This will release at holiday time later this year, and I’ll share more about it then.

Coming up… August is shaping up to be busy too. First up is the final Hat Trick Overtime short story, which is slated to be out in October. It’ll put a nice bow on top of the Hat Trick series. I’ll also finish up Dancing for Him, which is a re-working of my 2010 short The Dancer & Sexy Big Man. I’ll also start plotting a couple of new stories: a novella about Hat Trick‘s Leo & Matt (fans have asked for their story and I think it’s time for it to be told) plus some hardcore plotting on the start of my next YA series.