Jeffrey Rivera Talks About “Sing to Me”

I’m excited to welcome Jeffrey Rivera to the blog today to talk about his latest release, Sing to Me. It caught my attention because it’s a Nicholas Sparks type story, and I’m a sucker for those so I’m happy he’s here to tell us all about it. 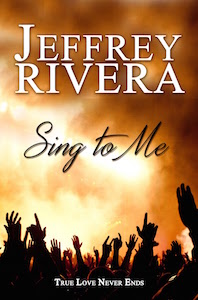 What inspired you to write Sing to Me?
I started thinking about how heart breaking it would be to write a story where there was this struggle between someone who has a rising career, who really could be a star and how he would make a choice between that and the person he loves. I wanted to create characters that had sort of an oil and vinegar relationship where they’re kind of like quasi­arguing with each other all the time, and yet there’s love and flirtation behind it. And so that’s originally what inspired me. And that idea kind of stayed with me for the last few years and was germinating in my head and then finally I got to the point where I just had to tell the story. I’d been wanting to tell a really short story that people could read quickly, but at the same time would give what Nicholas Sparks calls “a mini lifetime” so people got really get sucked into the story, and feel like they’d lived a mini­lifetime in a short period of time.

Why did you decide to call it Sing to Me?
The title was symbolic of course because you have a rocker who sings and his girlfriend, Emma, is always telling him to Sing to Me, because he’s the type of person who’s got a lot of talent who’s always been sort of in the background letting other people be in the foreground, and he just hasn’t let his light shine. She believes in him and tells, “You could be the star, you don’t have to be in the background. If you’re going to sing to anyone, Sing to Me.” That thought was the inspiration for the title, Sing to Me.

Why did you write a mainstream M/F book?
I’ve written Male/Female books before, but they were more ethnic, and I wanted to do something more mainstream this time to give it a better opportunity to be enjoyed by the world. I wanted a story that everyone could enjoy. It didn’t matter whether you were gay or straight, or white or black or latin or anything. I wanted something that would be more accepting but I actually have plans to do a M/M version of the same story at some point.

What authors inspired you to write this story?
I’m inspired by a lot of different authors; authors who have the talent to pluck those heartstrings and to take us on a true emotional journey. I think it’s rare for me to read a book that actually takes me on an emotional journey. Yeah, there’s Sci­Fi books, and there’s Thriller books that keep you at the edge of your seat when you turn the pages. But to be able to write a story that really captures your heart, so that you are absorbed into the characters, their lives, and you go on a journey with them, through thick and thin, it’s rare. There are few people who can do that for me. One of them is Nicholas Sparks. I mean, he’s my hero. If I could pick one author whose career I’d like to emulate it would be Nicholas Sparks. I also love Jodi Picoult; I think she’s an amazing storyteller. And I love people like Eric Segal; and people like James Patterson has several love stories that he’s done.

Where can we get a copy of Sing to Me?
You can get on iTunes, BN.com, and here on Amazon.