What Happened During NaNoWriMo 2015 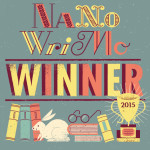 November turned into my most epic writing month ever, and it played out like I’d hoped it would in the post I made on NaNoWriMo Eve. Instead of working on two stories though, I ended up with three.

Here’s how things turned out:

Overall in November I wrote just over 70,000 words. I’ve never managed that much and it was exhilarating to go past the NaNo 50k goal on November 21 and then creating another 20k. Even the trip that happened the week of November 16 didn’t stop me as I did more than the NaNo minimum all but one day (and that one day I was only 300 words off).

Hopefully this is the beginning of a new pattern of writing where I’ll do these sprints every day no matter what (as I write this I have to cop to not doing that so far in December between a work trip and editing on Breakway & Score, but I’m hoping to right that wrong as this week gets started). What I’m sure of is that 2016 is going to be awesome as I understand how to write more, faster.