Will and I have talked about going to the Gay Romance Northwest Meet Up since we relocated to the West Coast in 2014. This year we finally made the trek to Seattle. It was a great time, and a model for events that will hopefully start to pop-up around the country.

The event kicked off Friday night with a reading program at Hugo House, a local Seattle place “read words, hear words, and make your own words better.” The evening split into two sections: TransFics and Love Bites. It was a treat to hear from the trans and gender queer authors during TransFics because it exposed me to a part of gay romance I don’t get as often as I’d like. In particular, I enjoyed Austin Chant, Tobi Hill-Meyer and EE Ottoman (Austin and Tobi read from forthcoming works while EE read from Documenting Light).

I was honored to participate in the Love Bites portion of the evening, where I offered a five minute scene from Hat Trick. Among the authors who stood out for me in this part of the night were Richard Compson Sater (who read from his forthcoming novel Rank) and Karelia Stetz-Waters, who read from her story in the GRNW anthology Magic & Mayhem.

On Saturday, the event at the Seattle Public Library kicked off with a keynote where Richard Compson Sater, Tobi Hill-Meyer and Alex Powell talked about their vision for gay romances future. The common theme was to see even more books published  that covered the spectrums of sexuality, gender and race so that everyone would find themselves in books.

After the keynote, there were breakout panels, which also included a track for writers. I wish Will and I had split ourselves up to see more, but we hung together. The first panel we attended was “Trans Authors on Characters, Stories and Industry,” where the trans and gender queer authors talked about their work, representing their part of the LGBTQIA+ spectrum and the challenges they can face getting their work published. It was quite enlightening to hear how these authors approach their work and the stories they want to tell. I was glad they provided a reading list so I could explore their recommended books.

The next panel we attended was “Erased No More: Bisexual Characters in LGBTQ Romance”. This was another fascinating panel, especially given all the discourse on gay for you and bi-erasure that’s been happening over the past few months. Of particular interest here was the authors talking about editors and readers questioning if a character was really bi due to the actions of the character within a particular book. I’m not sure how either a reader or editor is in a position to say that. An editor, of course, might suggest to bump up aspects of a character to make something more clear, but to just say that a character isn’t really bi seems out of bounds to me.

The day wrapped up with a book fair and signing with the participating authors. It was enjoyable getting some of my newly purchased books signed and to talk with the authors as well (my book haul is shown below):

I’m glad we got to add this to our travel calendar and next year I suspect I’ll attend as a participating author now that I’ve attended once. It’s a wonderful regional conference that has an eager crowd (there were approximately 180 in attendance on Saturday). It’s not as big as GRL, but it’s cheaper to attend and covers more of the gay romance spectrum which is great as both an author and a reader. 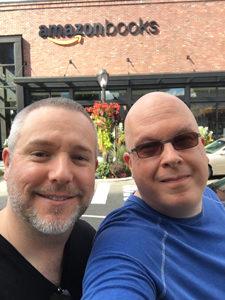 GRNW was the first time we’ve been to Seattle. We also took a trip to the Amazon Book store in University Village. I’ve been curious about the physical Amazon store and I wasn’t disappointed. It was a good shopping experience and very much Amazon since there was a lot of importance placed on high ratings as well as “if you like this, then you like…” It’ll be interesting to 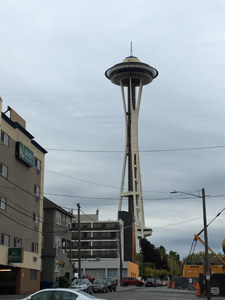 see how many stores Amazon will open (there’s already one in San Diego and another coming in Portland).

We also had some good food at the Brave Horse Tavern, including an amazing warm pretzel with smoky peanut butter and bacon. And, while we didn’t go to the Space Needle, we were close enough to snap a good picture of it.

Next year GRNW is expected to be in November and we’re most likely going to go back since we enjoyed this year’s so much.