I reformed how I read in 2017. Instead of just reading a single book at a time I got into the habit of having an audiobook and a book that I was reading in progress at the same time. Typically I’d listen in the mornings while I worked out or on trips. Reading would come in the evenings before bed and possibly at random times during weekend afternoons. This method allowed me to read 57 books during the year. In 2016 I’d read 40 and I’d set that as the goal for 2017. I ended up at 143 percent of the target which is awesome.

The breakdown was 21 audiobooks, 36 romance titles, 11 young adult books and two nonfiction. The other books divvied up into one-off categories that I couldn’t figure out how to categorize.

One of the things I did during the year was reading some of the most prominent authors in the gay romance genre for the first time. Rhys Ford, Heidi Cullinan and Mary Calmes were first-time reads. It’s a little embarrassing that I’ve missed reading them for so long. I also got on the bandwagon of Jay Bell’s Something Like… series and fell in love with it. To see such an epic story played out over so many books is inspirational to me as an author. While I’ve only read the first four, I’ll definitely be coming back for more.

Looking at books that have stuck with me from 2017 I have six that just thinking about them, gives me goosebumps. 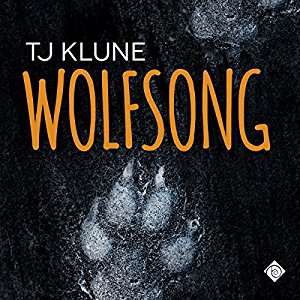 Early in the year, my fascination with TJ Klune’s storytelling brought me to Wolfsong, which blew my mind. I’m not one for paranormal usually but this epic story of a human who gets involved with a wolf pack.The romance of Ox and Joe was incredible. Just considering the story brings many emotions even though it’s been nearly ten months since I read it. The entire story is wrapped up in Joe’s line when he first encounters Ox, “Tell me why it’s all candy canes and pinecones and epic and awesome.” Epic and awesome just barely covers what Wolfsong is. Kirt Graves audio performance punched the emotional buttons even more. Ravensong comes out this summer and I can’t wait.

Honestly Ben by Bill Konigsberg was an excellent find this year. Openly Straight is one of my all-time favorites and that Bill came back with the sequel looking at the events after Openly Straight and coming from Ben’s point of view was tremendous. He covered so many things around the labels we put on each other, the pressure placed on teens—both from themselves and by parents–and even the pitfalls of honesty. I always look forward to Bill’s books and this one was a high mark in the year.

I also have a great love of Becky Albertalli’s books. Simon vs. the Homo Sapiens Agenda is high up on my all-time favorites list (March won’t get here fast enough for the Love, Simon movie adaptation). The Upside of Unrequited took Becky’s storytelling into new territory. This time it was a book about twin sisters who rapidly discover their differences as they explore love. I’m excited that Becky has yet another book coming in April 2018, that one is a sequel to Simon. I can only hope that she continues to produce books yearly because I’ll take her books in as fast as she can put them out. 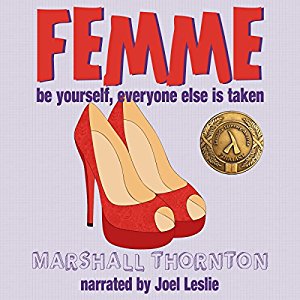 Femme by Marshall Thornton was a book that came to my attention because of Joel Leslie, who narrates the audiobook. He told me it was an important romance. He was a 100 percent right. The story of Lionel and Dog brought to light many issues in the gay community and how the community can turn on itself. Lionel by his own admission is a femme. He’s proud of who he is. He’s proud of the red pumps that he occasionally wears. But he realizes that sometimes how others perceive him can get in the way of things like finding and keeping a job—or a boyfriend. When he ends up in a romance with Dog, whose a straight acting softball player. Dog isn’t sure he can date someone like Lionel, even though he’s attracted to him. The book explores so many issues and I loved it. Far more goes on in this book besides romance.

Rebel by Rhys Ford was a late in the year read but it had to be on this list. The story of Gus and Rey and their second chance at finding love was one I was sad when I reached the end. Rhys draws such amazing, fleshed out characters and then puts them through hell. But it’s all worth it in the end. She’s also created a rich universe as the 415 Ink series deals with Gus and his brothers. I look forward to following the series because as much as I enjoy angst-free, category romances I also love challenges, angst and heartache. 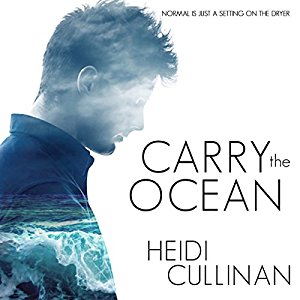 Carry the Ocean by Heidi Cullinan is another a book that’s been on my TBR forever. A couple of the listeners of the Big Gay Fiction Podcast prodded me into reading it and I’m so glad they did. The story of Emmett, who is on the autism scale, and Jeremy, who has anxiety and depression, was incredible. The depth that Heidi brings to the story as the characters struggle to help each other to understand what their lives are like and then, as Emmett puts it, make modifications so they can be with each other and have an independent life is extraordinary. Again, this isn’t a straightforward romance, but it has such heart and such amazing characters that you can’t help but root for them and fall deeply in love with the story. Plus from the audio perspective, Iggy Toma brings Emmett and Jeremy to life so well.

That’s a look back at the 2017 books that were the very cream of the crop of the overall great year of reading I had.

You can check out all 57 books on my Goodreads Challenge List. And I’ll be starting up the 2018 Challenge with the goal of at least making 57 again and hopefully more.