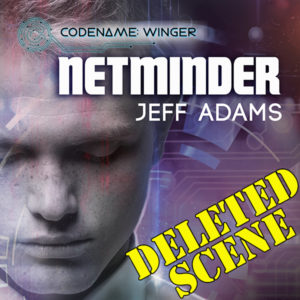 Netminder (Codename: Winger 4) presented the most challenges of any of the Winger books to write. Since I knew it’d be the final book, there were all the various threads to wrap up to since it was important to, hopefully, create a satisfying ending. At the same time, the action had to amp up becuase Theo is increasingly challenged on each mission.

It seems I went to far in the initial draft. A couple of beta readers as well as Laura, my trusted developmental editor at Harmony Ink Press, felt Theo and the reader needed a bit of a break because the pace was too relentless in the first third of the book. It was mentioned that I wasn’t writing an episode of 24. So there were some heavy revisions, including the elimination of a couple of scenes.

What you have below is the original Chapter Four. It’s the only deleted scene that’s safe to offer without spoilers. It’s a given from the Netminder‘s blurb that Theo’s on the run so that he’s holed up in a hotel isn’t a big stretch. I hpoe you enjoy seeing some of what Theo could’ve go through in Netminder.

I jerked awake to banging on the door.

The room light came from the TV, which I’d left on low volume. I didn’t usually sleep with noise, but I’d tossed and turned for a half hour before I decided some noise might help distract my brain from grinding on all of the problems.

My watch said it was a little after one. I’d only been asleep a couple of hours after having no luck fixing anything.

“FBI,” a woman’s voice said. “Open the door and identify yourself.”

Even if Mom used her government contacts to find and secure me, she wouldn’t allow it to be that obvious. Banging on the door in the middle of the night only attracted attention.

I’d slept in my clothes. My preference would’ve been just boxers, but being ready to go seemed a good idea.

Turned out to be the right choice.

I got off the bed and stepped into super cold sneakers. At least they didn’t squish any more.

Through the peephole, a man and woman were in view. Their attire was unremarkable, slacks and raincoats with what appeared to be regular dress shirts underneath.

Standard issue FBI badges appeared—the woman’s first and then the man’s. Their names meant nothing to me.

“Winger.” The woman’s voice was soft, barely making it through the door. “We’re here to get you to safety.”

Slowly, I slid the security latch over the hook, trying to do it as quietly as possible. They needed to believe I already had it in place—and it was stupid I hadn’t latched the door before I went to sleep.

I slowly opened the door, keeping my weight against it in case they tried to force entry. The latch could only handle so much pressure.

It felt foolish when I learned the new code phrases every two weeks. There were six in all that were meant to identify safe people in dangerous situations. That we used them in modern times was weird to me—until tonight.

The duo looked at each other and the man spoke. “Code 742. Do you want a donut?”

I nodded and pushed the door closed so I could release the latch.

“Your mom and dad will be so relieved,” said the man.

I turned the deadbolt and made sure the latch was secure.

No TOS agent would refer to my mom and dad in an unsecured situation. They would either call them by codename or not bring them up at all.

I needed a way out.

Rushing to the desk, I stuffed the laptop into my pack, which luckily I’d repacked as soon as it was dry. I threw on my jacket too, which had been on the back of the desk chair.

I threw the curtains open. The second floor wasn’t too high and the room was above the overhang. That was a score—except this window had no way to open it.

The agents pounded on the door and at least once slammed into it. So far it held. Given the noise the agents made as they tried to force the door, they must’ve convinced the desk clerk they were legit.

No way around it. I had to make a mess. I pulled the TOS phone from my pocket and flipped to the app I needed.

Touching the phone to the glass, it spidered immediately when I hit Go. It didn’t release from the frame, though. I upped the power and tapped Go again.

The glass dropped away with most of it falling outside. The TV went dark as its glass cracked along with the mirror and picture frames.

It looked six feet or so to the overhang and then probably another fifteen feet to the ground. There could be agents in the lobby or waiting under the overhang. The parking lot, however, looked about as full as it had when I arrived.

The thump against the door had more force—the metal and wood creaked.

I pocketed the phone and shouldered the pack as the door burst open.

Someone grabbed my shoulder and pulled me back just as I climbed into the empty window frame. I scrambled to stay on my feet as I landed on the floor.

The man who’d been at the door jerked my hand hard, trying to drag me toward the hallway.

“Let me go!” There was no reason to be quiet. Making a scene, as if this man was trying to abduct a minor, could be helpful.

Where was the woman? Calling for reinforcements? Trying to secure the hotel?

“Why are you making this a difficult, Winger.”

I pulled hard against his grip and glared. “If you knew the protocols better you’d already have me. But you screwed up.”

As I struggled I delivered a powerful kick to the man’s knee. He grunted and released me, causing me to stagger for a moment.

I wasted no time jumping out the window.

Rolling to land was out of the question since I had the pack on. I prayed for a landing that didn’t break anything.

Luckily I got what I wished for.

I ran to the corner of the overhang and looked over. This was too far to jump. I recalled columns at each corner, and climbing was the only way.

Lowering myself over the corner, it took a moment to find the column I could lock my legs on. The man dropped out of the window but didn’t move. I guessed I’d kicked him hard enough that his knee resisted.

My climbing wasn’t great. I didn’t know how to get my hands down and on the pole. Hockey didn’t prepare for everything. I figured it out before I fell off, though. As soon as I was down a few feet, I dropped to the pavement.

Voices called after me—using my real name—as I took off across the parking lot toward a field.