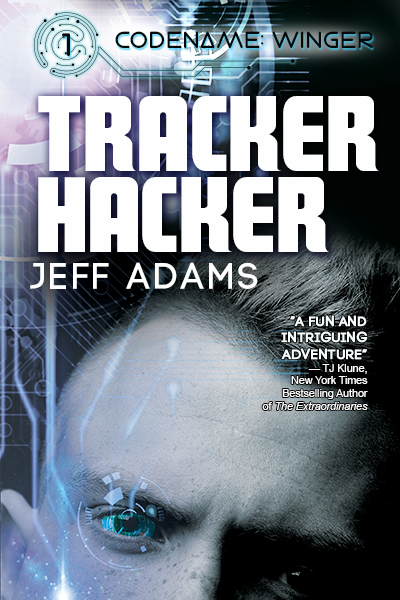 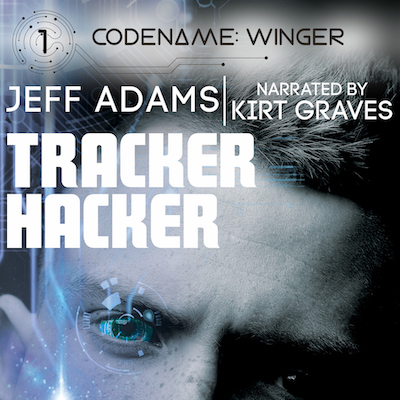 At sixteen, Theo Reese is the youngest agent for Tactical Operational Support. His way with computers makes him invaluable. He designs new gadgets, helps agents in the field (including his parents), and works to keep the TOS network safe. When a hacker breaches the system TOS uses to track agents, Theo is put to the test like never before.

Thrust from behind the safety of his desk, Theo must go into the field to put a stop to the hack. It’s personal too because one of the agents who has gone missing is his father. And just to make it more interesting, he’s got to keep everything a secret from his boyfriend and teammates.

Can Theo get the job done, save his dad, and make things good with his boyfriend?

This edition includes the short story A Very Winger Christmas

Listen to Kirt Graves read from Tracker Hacker: (4 minute audiobook sample. The text from this sample can be found in the “Excerpt”) 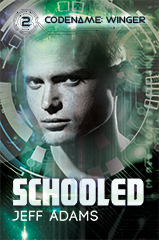 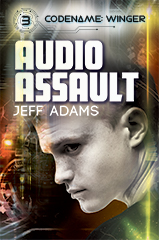 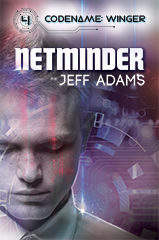 “A fun and intriguing adventure with fast-paced action and a delightfully authentic voice in Theo. This curious YA novel reads like an old-school thriller. It was wonderful to see an established queer couple, and the tension coming from Theo needing to keep his secret from Eddie had me on the edge of my seat. It’s still somewhat of a novelty to see an established queer couple after the happy ending, and I loved the direction of their relationship. Adams understands the workings of a teenage mind, and I can’t wait to read the rest of the series. Part mystery, part thriller, and all heart.” – TJ Klune, New York Times Bestselling Author of The Extraordinaries

“Jeff Adams is a genius–and Tracker Hacker is proof. Think Adam Silvera meets Anthony Horowitz: a YA technothriller that’ll have you rooting for Theo as he faces down the bad guys and cheering as he builds a happy relationship with his boyfriend, Eddie.” – Gregory Ashe, author of the Hollow Folk series

“This book takes several wicked turns and does things that surprised me. Jeff Adams takes a tale that’s been told before, but gives it a spin I haven’t seen yet. It’s fast-paced, well told, and may have you biting your nails just a little bit.” – Will, 9 out of 10 at WillReads.com

“If a computer wiz married James Bond you would get Theo Reese.” – Ariel, 4-stars at Gay Book Reviews

“This was truly an incredible read. It is suspenseful. It is action packed. It is full of danger and mystery. It also has Love included in the read with a lot of wondering what is going to happen next and just who is good or who is bad.” –  Tosha, 5-stars at Gay Book Reviews

“I really liked the story and can’t wait to see what Winger does next!” – Avid Reader, 4.5-stars at Wicked Reads

I guess most people probably think their life isn’t much different from their friends’, and it’s probably not. But mine very much is.

My name’s Theo, and I’m a sixteen-year-old junior at McKinley High, where I’m a damn good, high-scoring winger for Tigers hockey.

I suck at science and literature, but I can do anything with a computer. I’ve been taking afternoon classes at MIT since last year.

Eddie’s my awesome boyfriend. He’s a science nerd who makes me swoon. All he has to do is look at me over the top of his geeky black glasses and I’ll pretty much do whatever he wants. It was murder having him as my chemistry tutor last year, because all I wanted to do was make out with his cuteness.

Here’s where my life gets weird.

Five years ago I used my mad computer skills to figure out why my parents often left for long periods of time.

I wanted to know why they weren’t like other parents.

Usually if one parent’s gone, the other is around. Not so for me. They traveled together a lot, leaving me at home with Uncle John.

When I asked what they did for work, all they said was that they helped people for an international relief agency. I told them I was doing a report for school. They answered all my questions. But it’d seemed like I wasn’t getting the whole story.

So I hacked their phones.

I discovered they were agents for something called Tactical Operational Support. They traveled around the world solving problems, though I didn’t understand what kind.

Oh, and Uncle John. He’s not related. He works for TOS with my parents. One of his jobs is watching out for me when Mom and Dad are away.

Mom and Dad grounded me for the phone hack.

I’d impressed TOS. They signed me on as a contractor to work with their tech teams on software and technology. Mom and Dad weren’t keen on that but decided since I already knew their secret, it was okay if I helped out.

I make some serious bank on the job. It’s more than enough to keep me on the cutting edge of technology, have a sweet bike, and save for college and beyond.

I work on missions sometimes, especially ones my parents handle.

My first was when I was fourteen. Uncle John woke me up in the middle of the night to break my parents out of a confinement cell. The agency techs couldn’t do it, and John was certain I could. It was easy—I triangulated on the building TOS knew they were in, looked for the cell phones the bad guys were using, found the ones on the LAN, and….

I suppose I shouldn’t talk about that. Ultimately I broke my parents out and disabled the baddies by locking the doors around them.

These days I’m teaching the agency guys how to be more agile and more confident with on-the-fly coding to solve problems.

As strange as this gig is, I love it. It’s a blast working through complex problems to get the job done, whether it’s an emergency like saving my parents, or helping keep the agency’s tech up-to-date.

It sucks not being able to tell anyone, though, especially Eddie. Mom and Dad say telling anyone could be dangerous. That’s why they didn’t want me to know about them.

My friends think I do consulting work through my MIT connections, which would also be awesome.

Want to know what’s super cool about working for TOS?

To them I’m not Theodore Reese, or even Theo.

They call me by my codename—Winger.