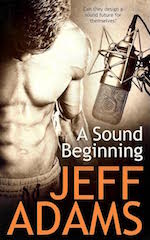 As Diego stepped closer, Harry caught a whiff of the man’s cologne. Harry already had a small crush on Diego—a throwback to his first one. He reminded Harry of the lumberjack from the label on the paper towels his mom had always bought when he was a kid. That brawny man, in his red-plaid shirt with the beard and broad chest, had been Harry’s clue that he liked boys.

Ever since his first meeting with Diego, Harry appreciated the man’s easy going sense of style. He usually wore good-fitting jeans and either a long or short-sleeve T-shirt and work boots. The T-shirts were always bold colors and emblazoned with the company logo. Something about the woodsy-ness of the cologne today made Harry take another look at Diego.

The T-shirt revealed a fit upper body, no doubt honed from days spent on construction work. Harry subtly breathed in his scent and immediately wished he hadn’t, as his cock leapt a little in his jeans. He hadn’t been with anyone since Charlie, so it didn’t take much to arouse him.

“That makes sense,” Harry said, hoping he hadn’t paused too long and wasn’t showing an obvious tent in his jeans. “The extra desk space will be good to have and since this room is large all the furniture will still fit comfortably.” Harry went back to the cabinets. “Let me get the rest of this stuff outta here.” He knelt down in front of the cabinet and started packing away some portable disc drives that held his archives.

“Here, let me help you,” said Sara. “Everything into the tubs?”

The cabinet Sara worked on was full of shoe boxes containing photos. There were easily a dozen boxes, some more organized than others. It was only in the past couple of years Harry’d embraced digital photography, so he had lots of prints. As Sara pulled out one of the boxes, it picked that moment to disintegrate and spill its contents all over the floor.

“Shit. I’m sorry,” Sara said as she scrambled to carefully pick up the pictures. “Sorry… Language.” She looked and sounded flustered.

Harry saw moments of his life with Charlie spread out on the floor and quickly moved to help her. Harry’s eyes were drawn to pictures from a cruise they’d taken four years ago, celebrating their first anniversary. He picked one up and felt the familiar tug on his heart as the memories flooded back.

“I’m so sorry, Harry,” Diego said, moving in to help as Manny did the same.

“It’s okay,” Harry said, quickly letting the picture drop into the plastic bin. “I really should get these digitized so they take up less space.” He tried to sound as if he wasn’t suddenly in emotional turmoil.

The front door buzzer chimed and Harry was grateful for a reason to leave the room.

“That’s probably my friend to get the desks.” He stood up. “Don’t worry about that, and I’ll make quick work of it when I get back,” he said as he headed out of the office.

Harry went quickly from emotional to berating himself for letting the pictures get the better of him. He needed to move on. They’d made their choices and nothing was going to change that.

“Hello?” he said when he got to the intercom.

“Perfect. Come on up.” He let them in and went to greet them.

Despite what he’d said earlier, Harry hoped Diego’s team would clean up the mess and unload the remaining cabinets while he was gone. He was afraid of what else he might find. He’d make sure to sort the pictures when he was alone.