Head in the Game by Jeff Adams 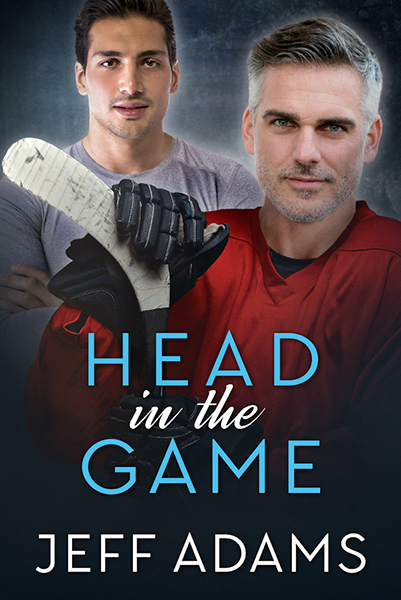 Head in the Game: An m/m hockey romance novella

Pro hockey defenseman Roger Jacobson’s game is slipping. His contract is up for renewal and his fourteen-year career hangs in the balance. Desperate to find a way out of his professional slump, Roger returns to his hometown to work with his old coach and assist with a summer hockey camp.

When Dylan Barker skates into his life, he’s a romantic distraction that Roger couldn’t have anticipated. The handsome graduate student also happens to be his mentor’s son.

Can the love of a younger man mend Roger’s broken spirit and get his head back in the game?

Note: This novella originally appeared in the Changing on the Fly: The Second Period anthology.

“This is a great short story about hockey. I really enjoyed the story of Roger learning to trust himself and get his confidence back. It a great read. I recommend this book.” – Therese, 5-star review on Amazon

“I absolutely love this book. It is a wonderful read. Couldn’t put it down and I missed my subway stop.” – Rob, 5-star review on Amazon.

Dylan Barker loved the game. Loved being on the ice.

His father was a huge reason for that. The game hadn’t been forced on him, though. As soon as he asked for skates, when he was three, he got them. In high school, he’d gotten good-natured ribbing from his Panthers teammates because his dad was the coach. Coach B treated everyone the same so Dylan had never gotten off easy. His passion had never waned in the years following.

The campers were starting to come onto the ice for warm-ups. Dylan had been out for an hour or so. He was at the rink even before his dad to skate, shoot pucks, and enjoy the morning. Some people went to the gym; he gravitated toward the rink. He spent many mornings working on speed, endurance, and puck handling.

So why was he getting ready to go to grad school instead of going pro? He fielded that question a lot. It wasn’t where his heart was. As much as he loved playing, he didn’t want that to be his job. Besides hockey, his other passion was teaching, likely acquired from his parents. Mom was a history professor while Dad coached and ran the high school’s Phys Ed department.

There’d been many talks with Dad on the pros and cons of going pro and teaching later. But even while he played for University of Maine’s Black Bears during college, it was working with young people that made him happiest. Helping them learn to skate and play the game he loved was the best job ever.

This summer was going to be perfect. Dylan was coaching alongside Dad for the first time. He’d always attended summer camp as a player through high school. The past four years he hadn’t been able to get home because he’d spent the summers in Orono working with youth camps.

Those jobs paid off because Dad asked him to take over as head coach of the under ten group. It was fortuitous the previous coach moved to Ohio for a new job. Things were clicking into place better than expected. He was going to be an offensive coach for the Panthers this fall too. It wasn’t a full-time job because he needed to focus on grad school, but the job would help limit his student loan debt.

As he stick-handled, some of the kids opted to skate alongside for impromptu passing drills. Others tried to emulate what he was doing as he passed the puck from his stick to his skates and back.

The hulking guy who stepped on the ice next caused Dylan to lose the puck between his skates. The longish brown hair, lightly scruffed cheeks, and an expression that was an odd mix of happy and sad drew his attention. Dylan stopped against the boards and watched as the newcomer talked with a couple of the older campers. It didn’t hurt that the rest of the guy was solidly built. Even in the sweatshirt he wore, it was clear the guy had bulk. It was an easy guess he was a defenseman.

Recognition shot through him like a lightning bolt. That was Roger Jacobson. He’d seen the name on the coaching roster and was glad that one of Dad’s NHL stars was here this year. How was this guy not featured in the Hot Hockey Players group that Dylan was part of on Facebook? He might have to fix that personally.