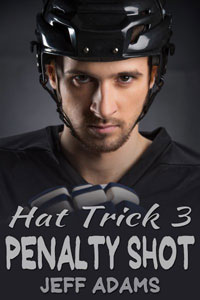 “Come on, Other Captain, I’m hungry.” Alex called from his locker.

“Uh-oh, Simon,” Danny said from the sink next to mine, “sounds like someone’s getting a little fussy.”

“It’s not my fault he didn’t eat before practice.” I was running a little behind getting cleaned up from out afternoon practice and Alex was nudging me along. I finished combing through my hair as I called out to Alex. “Hang on, Other Captain. Almost done.”

Alex coined the term “Other Captain” right after practices had started up last month. We used it a lot between us, and some of our teammates were using it, too. Getting named co-captains at the end of last season was an awesome honor. Making it even better was that Danny, one of our best friends, was named alternate captain. It was setting up to be an excellent senior year of Wolverines hockey. Now that we were a couple days into the semester, we were on our way towards a spring graduation, too.

“Okay, Other Captain,” I said, returning to my locker to find Alex slumped on the bench in front of it. “Ha ha. You’re not that far gone.” I stored my shower stuff and grabbed my backpack. “Let’s go.”

Alex bounced up as if he hadn’t been overly dramatic just seconds ago and picked up his pack. “Food!” He pointed to the doorway.

We darted from the locker room, headed for the door of the rink. We had just enough time to grab a quick bite at our favorite dining hall before we had to go our separate ways for a few hours.

“Hey, Miller? Roberts? Can I talk to you?” A loud, but lilty voice shouted as we exited the rink.

From the parking lot, one of the thinnest guys I’d ever seen came towards us. He was tall and seemed even thinner than the word lanky could accurately describe. He wore a loud outfit—bright yellow cargo pants, teal t-shirt underneath a beaten up denim jacket that had more buttons than denim showing. Most of the buttons featured a variation on a rainbow logo.

“’S up?” I asked as he got close enough to talk without shouting.

“I’m hoping you guys can help me out. Can we talk a minute?”

“Do we know you?” Alex sounded as confused as I felt.

The guy gave a quick laugh. “No. But you will after we talk.” Alex and I looked at each other. His eyes said that he just wanted to go eat and my stomach rumbled in agreement. “Please?” The word was stretched out and he gave us a pouty face. Before we could respond, he continued. “I’m Scott. Scott Polan. Friends call me Scottie.”

He put his hand out to me.

I glanced over at Alex, who eventually introduced himself.

“Totally. I know you guys. Can’t believe I’m freakin’ talking to you.” The more he talked, the more he bounced. He paused, collecting himself. “So like I said I could use your help, I mean if you’ve got time. I know you must be busy.”

I smiled. They guy was kind of adorable as he tried not to stumble over his words. “What can we do?”

“Can you coach a hockey team?”

Of all the possibilities, that wasn’t anywhere on the list of what I thought he’d ask.

“Sorry. I know that. I mean, will you coach a team I put together?”

“You’re putting a team together, but don’t have a coach?” I asked.

“Okay, from the top.” He paused and took a deep breath. “I moved here over the summer. My school doesn’t have a team, so I went to tryouts at two rinks and got rejected. I’m a fabulous goalie.” He dropped into a goalie stance, squatting down, one arm up with his hand open to catch and the other in blocker position. “I had a letter of recommendation from my last coach. But it seems all anybody here sees is this.” In a flourish he moved his hands to showcase himself.

I opened my mouth, but before I could speak he held up a single finger to indicate I should stay quiet.

“I know I don’t look like a goalie,” Scottie said with a quieter, more serious, tone. “But this is who I am. I play damn good hockey and I should be able to get on a team. You know, ‘If you can play…you can play” and all that.”

“So you were passed over because you’re gay?” Alex asked.

“No one flat out said that. But I saw the goalies I was against. I’m as good or better, but the coaches all by-passed me, even to be a backup. So, I thought I’d put together a team and find a coach to make us great.”

“How long have you been working on this?” Alex asked.

“Couple of weeks.” His excitement was building again. “I’ve already got ten guys. It occurred to me during lunch today that you guys would be great!”

“Of course.” He wasn’t done trying to sell us on this yet. “I can run everything about the team, but there’s got to be at least one adult coach on board. Plus we need practice. We have to become a team and that takes a coach.”

The request intrigued me. We enjoyed coaching. How it would fit into our schedule was another matter, but Alex had a point.

“Name the time and place and I’ll be there.”

His tendency to interrupt was annoying, but his enthusiasm was good. Alex’s body language shift was subtle, but he wasn’t thrilled I’d opened the door to the request.

“Let me have your number and I’ll let you know.”

Scottie quickly called out the number as I entered it into my phone.

“Thank you. Thank you both.” He ran backwards towards his car, keeping his eyes on us as he moved.

“We haven’t said yes yet,” Alex called out.

“I know. But you will.” He turned around and jogged the rest of the way to his car.

Alex looked at me with a weary expression as Scottie drove away. “Did we ever have that much energy?” he asked as we headed towards the dining hall.

“We’ve got energy. We just don’t channel it that way.”

“Maybe we will. We should at least see what kind of fabulous goalie he is. If he’s good, maybe we can make it work, get some other people from the team to help out. Who knows?”

Alex took my hand in his as we walked in the pleasant late afternoon sunshine. “I’ll follow your lead for now, but I want to be cautious about getting us overbooked.”