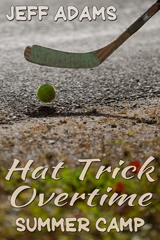 “Simon, as many great summer trips as we’ve had, I think this might be the best one yet and it’s only just started,” Alex said right after he let go a contented sigh.

Alex and I went camping every summer. We’d spend at least a week at a campsite, as far into the woods and secluded as possible. Just us, a tent, and basic provisions. It was a blast. For our fourth summer trip, we mixed it up big time and so far I loved it. Neither of us went to summer camp as kids, but this year we decided to spend a month working at camp.

It was the end of the first day, and we were sitting on the steps leading up to our cabin. We were tucked in the woods near Muskegon, Michigan. The cool evening breeze, mixed with the wood smell of the cabins was perfect. It smelled like summer. Adding to the idyllic scene was sitting between Alex’s legs with my head resting against his chest. We looked out across the campground. Other coaches were hanging out in front of their cabins while the campers were in bed since it was past light’s out.

“You’re right,” I said, craning my head up to look at Alex. “Meeting the campers today was great. It’s gonna be awesome coaching for the next month.”

Back in March, we’d been approached by Carson Stilson, a wealthy Michigan alum, to coach at a new hockey camp he was starting. He transformed an abandoned arts camp into a hockey retreat with four half-sized rinks and one regulation one. Stilson invited college players to coach for camp’s inaugural year. It sounded like a great way to spend part of our summer, playing hockey and getting some sun. We jumped at the chance to do it.

While Alex and I had jobs, I was still at the Ann Arbor LGBT community center and Alex was at EdgeTech in Detroit, we managed to negotiate time away to come up here.

I gave a contented sigh as I snuggled in closer to Alex. It was early June, so it wasn’t super hot and there was a nice breeze blowing from the lake across the grounds. It made it very comfortable. The grounds were cool. There central area had six cabins for the campers and coaches arranged around a courtyard. Outside of that there were bathroom facilities and an administration building. There was also a boathouse, which I hadn’t been to yet, down by the lake. The new buildings on the grounds were the rinks. I can’t imagine the investment to build the three buildings that housed the ice facilities. There were basic necessities in terms of locker rooms, but the ice was well kept. I’d played on much worse at private rinks over the years.

“Hey guys,” Leo said, coming towards us from the cabin next door. Recommending Leo as a coach had been easy for us. It was awesome we were going to hang out with him for a month. We hadn’t done that since we’d all gone away to college. “I forgot how much I hated going to sleep when I was a teenager. I thought we’d never get everyone settled down.”

I nodded. “We had slightly better luck. Maybe we just wore our guys out more.”

Leo stepped over me and sat down on the step above Alex so we could easily see each other while we talked.

“How are your guys?” Leo asked.

“We’ve got an interesting assortment of players,” Alex said. “We saw some that are really good, but others who need a lot of work. I like that it’s mixed though. It’ll make the concept of working as a team that much more important so the stronger players support the weaker ones.”

“I think it’ll challenge our coaching, too,” I said. “We’ve only worked with people of like skills before. Advancing players starting at different levels is going to be interesting. I’m glad we’ve got the daily coach’s check-in so we can all learn from each other.”

“I’m paired up with a guy who’s going to coach college hockey,” Leo said. “Kieran graduated a few weeks ago and got a gig as an assistant at Boston. I’m hoping to learn a lot from him.”

Alex kissed the top of my head as I absently ran my hand over his leg. I considered shifting positions, but then decided not too. Everyone knew we were a couple, and there was nothing even PG-13 in what we were doing.

“I was worried about using up our vacation for this,” Alex said, “but I’m already sure it was the right choice.”

“Me, too,” I said. “We’re out in the woods, and for longer than we would’ve been if we were on actual vacation. Plus you got to come along” I held up my fist for Leo and he bumped it.

“It’s good for me, too, since Matt’s working in California for most of the month,” Leo said. “He’ll be back just before we head home.”

The cabin screen door opened slowly and out stepped Dylan, holding a hockey stick in one hand and his skates in the other, looking like a deer caught in the headlights. Dylan was sixteen and a good skater, but he needed to work on his aim.

“What’s up, Dylan?” Alex asked. With Leo, Alex and me blocking the stairs, he couldn’t go easily around us.

“Uh,” he paused, obviously trying to decide what to tell us.

“Looks like you’re trying to break curfew,” I said matter-of-factly. “Since I doubt you’re going to the bathroom with skates and a stick.”

He opened his mouth to say something, but closed it without speaking. He stared at us and we stared back, waiting for whatever he was going to say.

“Sorry,” he finally said, sounding deflated. Even his shoulders slumped. “I wanted to get in some more practice time.”

“We’ve got tons of time,” I said, untangling myself from Alex and moving to give Dylan room to sit with us. “Have a seat.” I patted the empty space I created between Alex and me.

“Simon’s right,” Alex continued as Dylan laid his stick and skates on the porch before he sat down. “There’s still plenty of time. Why the push for more practice?”

“Dylan, this is Leo, one of our best friends. We played together in high school. He’s coaching cabin three.”

“I need a scholarship. Bad.” Dylan looked intently at us, as if he was sizing us up. “My family’s been through a lot and we don’t have a lot of money. I shouldn’t even be here, but my dad insisted because he knew I wanted to do this. I need to show him it wasn’t wasted and get myself scholarship worthy. I’ll try for academic ones, too, but I need every opportunity I can get.”

“I know what it’s like to need the scholarship,” I said, making sure I kept eye contact with him. “I wouldn’t be at Michigan without it.”

He looked like he regretted sharing his family’s situation. I’d seen it a lot at the community center. No one likes to admit their family’s in trouble. I looked over at Alex and he gave me a slight nod. He already knew I would help Dylan any way I could.


[icon set=’1′ id=’94’ title=’Sign Up for Email Updates’] My email updates give you the latest about upcoming releases, access to exclusive excerpts, news about events, giveaways and more. Enter your email address and you’ll only get one or two emails per month. Check out the email archive to see what I’ve been sending out.