The Hockey Player’s Heart by Jeff Adams & Will Knauss 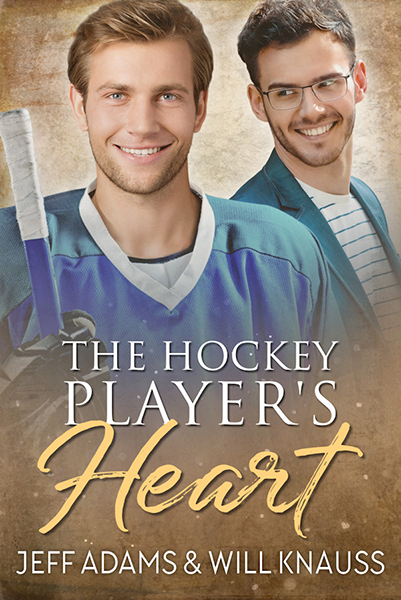 When hockey star Caleb Carter returns to his hometown to recover from an injury, the only thing he’s interested in is a little R & R. He never expects to run into his onetime crush at a grade school fund-raiser . Seeing Aaron Price hits him hard, like being checked into the boards. The attraction is still there, even after all these years, and Caleb decides to make a play for the schoolteacher. You miss 100 percent of the shots you never take, right?

Aaron has been burned by love before and can’t imagine what a celebrity like Caleb could possibly see in a guy like him. Their differences are just too great. But as Aaron spends more time with Caleb, he begins to wonder if he might have what it takes to win the hockey player’s heart.

“This was such a good read. It is a book about learning to trust your heart and learning to compromise in order to achieve the type of relationship you want. … I really enjoyed it and look forward to the next book in this series. ” – 4 Star Reivew from nakin1978 on Gay Book Reviews

Before Caleb and Pam could discuss anything else, their drinks and cinnamon roll arrived. The decadently iced treat was massive.

“It’s bigger than your head,” Pam joked, though it was only a slight exaggeration. They wasted no time pulling off chunks of sticky bun. “So, how long are you in town?” she asked.

“A couple of weeks. I’m scheduled to return to the ice for the first playoff game. If things keep going right, I’ll be on skates Monday. I’m going to call the rink and see if I can get some practice time.”

“I doubt that’ll be a problem. You know people will be glad to help. What made you come up here anyway?” she asked, taking a careful sip of her dark roast.

“Even though we’ve already clinched our playoff spot, everyone’s obsessing over whether I’ll make it back to the ice in time, wondering if I’ll be ready. The sports media has been more like paparazzi lately.”

“Well, you are the leading scorer.”

Caleb nodded. “It’s not like the team has been hurting in my absence.”

“They probably miss their captain.” Pam made sad eyes at him that nearly made him laugh.

“And their captain misses them.” He frowned and tried not to sound too grouchy. These conversations were why Caleb escaped the city. “You know I hate not being able to play.”

“I’m glad you’re not rushing it like you did after that sprain in eighth grade,” Pam said before rolling her eyes at him.

Caleb couldn’t help but grin at the memory and Pam’s expression. “I can’t put one over on the team doc like I

could on Mom and Dad. It was stupid, of course, since I ended up out far longer than if I’d just let it heal.”

“Well, you’re an athlete. Not usually a group known for exhibiting the smartest behavior when it comes to injury.”

Caleb raised an eyebrow at her and ripped off another huge portion of the roll.

“So, I was wondering, since you’re here, could you do me a huge favor?”

Pam sounded like she was making a request rather than a demand, and he was immediately suspicious. Though they were only eighteen months apart in age, his sister had always had a strongly protective streak when it came to him. Pam, however, wasn’t afraid to exercise her position as eldest whenever she needed something.

“What’s up?” He decided to play along to see what she’d ask. He was as much intrigued as afraid of what she’d pull him into.

“The school carnival is Friday afternoon, and it would be amazing if you’d sign a few autographs. It’s a fund-raiser for the after-school sports program. It’d be so perfect if the hometown hockey superstar could be there.”

Nervous laughter spilled out before Caleb could stop it. “That’s a lot better than anything you made me do when we were in school.”

Pam was the principal at Foster Grove Elementary, the same school they’d gone to when they were children. She’d always helped with school events as far back as he could remember. Her involvement usually meant he ended up doing something she needed.

“I promise you’ll just be signing stuff, nothing crazy. Unless you want to work the kissing booth too.”

“Why would there be a kissing booth at a grade school carnival?”

“I’m kidding, although it would certainly keep some of the parents busy. And if we had a celebrity, someone like you….”