Audra is Radiant in 110 in the Shade 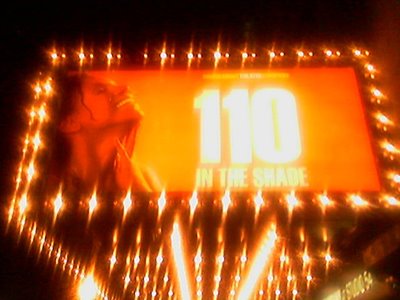 I went from having a Geek Out about her on Friday to sitting six rows away from her tonight! We just got home from 110 in the Shade and all the reviews raving about Audra’s performance were right on the money. She commands the stage in this musical revival of the 1963 show, which is based on The Rainmaker.

Audra plays a strong-willed young woman who is starting to come terms with the risk of becoming an old maid if she continues to be herself. She has an awakening with a stranger, a rainmaker, comes to town and shows her that she doesn’t have to compromise herself to live her dreams and find a husband.

Audra is top notch in singing and acting here. The end of the first act as she stands alone singing “Old Maid” is heartbreaking, you can here her pain in her voice and see it across her face as she realizes that she may spend the rest of her life caring for her brothers and her father. Watching her open up to the rainmaker and then have two men fighting over her in the end is joyous.

Having now seen the two actresses who lead the pack in this year’s Tony race for Leading Actress in A Musical—Audra and Grey Gardens‘ Christine Ebersole—it is going to be a tough choice for the voters because both actresses are doing some of their very best work. If I had a vote, I honestly don’t know how I’d mark the ballot.

If you make it to 110, watch out if you sit in the first couple rows, you might just get wet when the rain comes on down. And if you can’t make it, the cast recording of 110 comes out on Tuesday June 5 and you can listen to Audra’s excellent performance anytime you want.