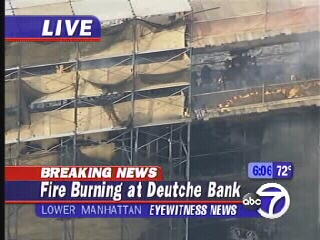 It’s been quite a few weeks in Manhattan.

There was the steam pipe that blew in the middle of a street in midtown.

There were the rains that flooded the subway system.

Today one of the only buildings that was heavily damaged during 9/11 that’s still standing—and a building that’s in the process of being torn down—caught fire. The seven alarm blaze started sometime this afternoon (we were actually walking by the building at 1 this afternoon and by the time I left to play hockey at 4:30 it was on fire). The picture above shows the scaffolding on the outside of the building on fire. By 10pm it was declared under control, but as I got home at 12:30am the West Side Highway was still closed, along with several other streets in the area and there is still a considerable fire, rescue and police presence in the area (and not to mention a smokey smell in the air). You can read the whole story on the fire here.