The Broken H by J.L. Langley 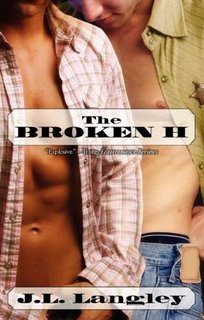 Last Christmas, Will gave me J.L. Langley’s The Tin Star and this Christmas I got The Broken H, the latest from Langley that follows some characters that were introduced in Tin Star.

In Broken H, we get more in depth with Sheriff Grayson Hunter, one of the good guys from Tin Star who helped Jamie and Ethan with their coming out. This time it’s the Sheriff and his childhood hero, Shane Cortez, who happens to be the foreman at his parent’s ranch, who are both coming out to the townfolk.

Gray and Shane have known each other for years, but a botched come-on when Gray was in his teens and Shane was in his 20s kept the two apart for more than a decade. The two are tossed back together when Gray’s father has a heart attack and they quickly discover that they should have never been apart.

Like Tin Star, Langley offers up a great romance with a good shot of eroticism along with some real-world challenges for the heroes. Since Gray is the sheriff, there is concern about what might happen in the next election… is the ranching town ready for a gay sheriff? Will Gray’s parents accept him and Shane as a couple, especially since Shane is like a son to them? What about Shane’s own past that brought him to The Broken H when he was 15? It’s a past he’s never talked about to anyone. There’s also the twist that a girl in town is trying to convince everyone that Shane is the father of her baby. Lastly (as if there wasn’t enough plot already), Shane has to get past the feeling that he’s too old for Gray since there is nearly a decade separating their age.

Broken H was a great, quick read that had enough plot turns to keep me riveted to see how it would all work out (even though it was mostly a given that it would work out since it was a romance). And, as an extra bonus, Jamie and Ethan from Tin Star made a couple of cameos appearances. I’m looking forward to seeing with Langley writes next.

Up next: Blood Prince (a Blood Ties novel) from Tanya Huff