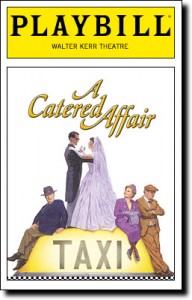 We finally saw A Catered Affair this afternoon. It’s been on our list of shows to see since it opened in April and it advanced to the top of the list a couple weeks ago when it was announced that it would close at the end of July. The show never quite caught on at the box office, and a lack of major Tony nominations hurt it even further.

The musical is based on the 1956 Bette Davis/Ernest Borgnine film written by Gore Vidal (and based on a teleplay by Paddy Chayefsky). For the stage version, Harvey Fierstein wrote the book and John Bucchino handled the music and lyrics. The cast is stellar with Faith Prince in the Bette Davis role and backed up by Fierstein as her brother and Matt Cavenaugh as the groom-to-be. Tom Wopat plays the Borgnine role. Sadly he was out of the show this afternoon so we did not get to see his Tony nominated performance.

Oddly with all this talent, I can only report that this show was okay. There was something very static in the presentation with few dramatic peaks and valleys. Given that John Doyle directed this, the monotone show was a surprise. Doyle has done amazing work the past two seasons with the revivals of both Sweeney Todd and Company. Maybe he chose this style on purpose because the story focuses on two working class parents trying to give their daughter the perfect wedding (even though she would rather not cause all the fuss). They have a dreary existence at best and at the top of the show have just buried their son who was killed in the Koren War.

This flat pace though, while not making the show boring, certainly leaves it lacking punch to the degree that it felt longer than its 90 minute run time. 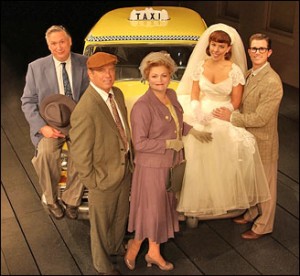 That said, there are some wonderful things happening in this show too. Fierstein beefed up the role of the uncle for the show and he plays it great, including getting one of the best songs. In “Immediate Family” he expresses his frustration for not being included in the initial wedding that was to take place in city hall. Faith Prince, also Tony nominated, truly shines as the mother who wants nothing more than to give her daughter a day to remember. Prince gets some heartbreaking songs about the life she hasn’t had and what she dreams for her daughter.

I am glad we got to see the show. It’s nice to see musicals that don’t rely on big spectacle to tell the story. Sure, I love those, but some of the best musicals are also quiet, more subtle and delicate in their story telling. I wish this has been a little tighter, but it was still a mostly satisfying afternoon at the theatre.

You can sample a bit of A Catered Affair with a look at Faith Prince’s performance from this year’s Tony Awards.