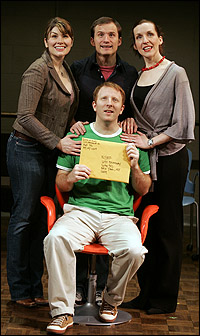 [title of show] started performances in its Broadway home last night and we went to the matinée today.

The show is about two guys writing a musical about two guys writing a musical. Huh? Yes, the musical chronicles its own creation (I know, sounds like a Star Trek space/time continuum problem). A few years ago Hunter and Jeff wanted to write a musical to submit to the New York Musical Theatre Festival. They had three weeks to do it and they ended up writing a show about trying to write a show for the festival. It caught on at the festival and went on to an off-Broadway run. It took about a year from the last off-Broadway performance, but with the creation of the [title of show] show, viral marketing took over and the little show about writing a show got a Broadway theatre… and there you go.

Now, you can imagine a show about writing a musical is chock full of theatre references and you’d be right. Nothing is too obscure to get a mention, even Broadway flops like Carrie and The Best Little Whorehouse Goes Public work their way in. The show also has a message about perseverance. One song in particular, “Die Vampires, Die!” explains how creative people must slay the vampires that crop up trying to get them to stop writing their novels, painting their works of art, composing their songs or writing their shows.

[title of show] is the first show out of the gate for the 2008-09 Broadway season. I hope it bodes well for what the rest of the season holds. Will and I loved being in the theatre to see the beginning of the run for a show that’s so original and good. I suspect, in about 10 months, there’ll be a lot of Tony nominations for [tos]. I wonder if they’ll update the show if that happens?

Here’s a look at the “ride” for “Monkeys and Playbills.” The song is great because it emphasizes the importance of writing no matter the outcome (you can always fix it later, but if the page is blank there is nothing to fix). Plus, it’s got a lot of great references to those flopped shows.

One of the final songs in the show is “Nine People’s Favorite Things,” in which Hunter and Jeff decide they don’t want to change the show from the original vision. It’s more important for them to be nine people’s favorite thing than 100 people’s ninth favorite thing. You can’t argue with that logic!