Friday Geek Out: Diana Ross, Central Park, In The Rain 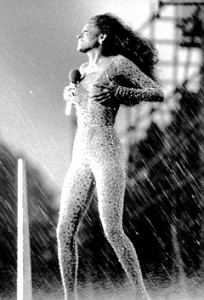 Every now and then I get the timing perfect and don’t realize it until I’m researching. The free Bon Jovi concert in Central Park last weekend made me think that I should write about one of my favorite TV concerts: the 1983 Diana Ross Central Park event. Turns out this Monday (July 21) is the 25th Anniversary of that show.

The concert was intended to be a one-night only event that would introduce a new album, kick off a world wide concert tour and raise money for a playground that would bear her name.

Within fifteen minutes of the show’s start, a huge thunderstorm poured down on the city (you can see the rain very well in this photograph from the New York Daily News). Ross kept the show going for a while, urging fans to stay calm as the rain came. Eventually, for safety reasons, the show was shut down. You can check out the clip below of her singing “Reach Out and Touch” to see the efforts she went to to keep the crowd under control. It’s quite the spectacle of showmanship. Unfortunately the YouTube video quality doesn’t let you see the torrential downpour, but you do get a good idea of the wind that almost knocks her over.

I wish YouTube had a clip of her ultimately having to leave the stage. It was a very moving moment as she encouraged everyone to get home safe and that they would try the whole thing over again the next day.

And, yes, they did come back the next day on a bright, sunny day. To the TV audience the concert was fantastic as Ross went through old and new hits. What Showtime didn’t get on the air was the group of thugs that were attacking audience members, robbing some 100 concertgoers. It was many years before New York City allowed another concert in Central Park because of the problems caused by the robberies as well as the damage done to the park by the crowds.

For a long time, I had a VHS tape of both days of the concert because I recorded it off Showtime. Sadly, that tape died. Why isn’t this on DVD? It was a great concert by an artist who was in her prime in the early 80s. Maybe it’ll happen for the 30th Anniversary in 2013.