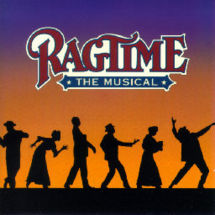 Ragtime began it’s Broadway run December 26, 1997 at the brand new Ford Center for the Performing Arts on 42nd Street. Ragtime, along with its neighbor across the street (a little show called The Lion King that opened at the newly refurbished New Amsterdam Theater a couple months earlier), helped turn 42nd Street into a Broadway hot spot instead of a run-down seedy part of the city.

Ragtime musicalized the acclaimed E.L. Doctorow novel with a book by Terrence McNally and music/lyrics from Stephen Flaherty and Lynn Ahrens (who were also responsible for the other Geek Out favorite, Seussical). Ragtime was huge in every way: huge cast, huge sets (including a model T Ford), huge new theater. But for all of its size, Ragtime worked because it told simple stories with big heart.

The show is set in the early 1900s and focuses on three distinct groups: an upper-class white family, an African-American musician and his missing wife and baby, and an immigrant father and daughter. Everyone’s world is turned on it’s head when the white family discovers the baby in their garden. Suddenly, in this “proper” white neighborhood, a black man is coming to call and nothing is the same again. Over the course of 2 and 1/2 hours, race relations, immigrant relations and the history of the era (including figures like Henry Ford and Harry Houdini) plays across the stage to an incredible score.

We saw the show during its pre-Broadway run in Los Angeles in September 1997 (it was part of the shows we saw while we were on our honeymoon) and a couple more times once we’d move to New York.

The cast for the show was stunning! Brian Stokes Mitchell, Audra McDonald, Marin Mazzie, Judy Kaye, Mark Jocoby, Peter Friedman and even Lea Michele who played “Little Girl” in Ragtime and went on to a very grown up role nearly a decade later in Spring Awakening.

Here’s the opening number from Ragtime, an introduction to the characters.

The show won Tonys in 1998 for Best Book and Best Original Score. Mitchell, Friedman, Mazzie were all nominated for their leading roles and McDonald won for her featured role. The show was, unfortunately, eclipsed by The Lion King and all of its flashy use of puppetry. Ragtime deserved much more attention than it got.

It was right for this show to win Best Score. This clip is not from the show itself but from a concert appearance by Marin Mazzie, who played Mother. “Back to Before” is an moving song about a woman who figures out she is far more than just her husband’s wife. It’s worth the jiggly camera movements to hear this song.

Ten years on The LIon King still plays while Ragtime hasn’t been seen on Broadway since January 2000. The show fell victim to its producing company’s woes. Canadian company Livent had big dreams to rule Broadway but it ended up in serious financial ruin. Ragtime lives on in many regional productions. I hope to see it again one day because it is definitely a favorite.