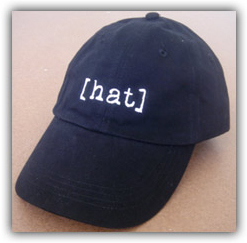 When we saw [title of show] in July, I liked a lot of their merchandise. I fell in love with [hat] and bought one on the spot. It’s the primary hat I wear now. And I’ve never worn a branded piece of clothing that has gotten so much attention.

At least once a week I get a “Hey [tosser]!” from someone on the street or in the subway. [tosser], of course, is the term coined by the [tos] creators for their fans. One of the more subtle recognitions I’ve had came last week on the commute home. I was standing against one subway door across from a guy in the other doorway. We both had our iPods on, so talking wasn’t going to happen. But, he pointed to his hat-free head and then gave me a thumbs up and a smile. It was a moment shared between two [tossers].

Of course, [hat] is a conversation piece too for people who don’t quite get it. I certainly enjoy spreading the word about [tos] to the uninitiated.

There’s one more piece of [tos] apparel I think I need. I didn’t notice it when I bought [hat] (or maybe it wasn’t available then… I’m not sure)… but a “Die Vampire, Die” t-shirt would be soooo cool! 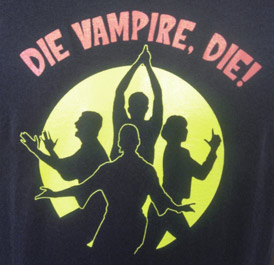 Need your own [tos] merchandise? You can grab it at Marquee Merchandise.