Weddings, Trek to a Lighthouse, Miss Richfield 1981 and the Final Day

Thursday was a jam packed day. As you may have already read, we were up early for the sunrise and we went to the Carnival parade. Between those events we took a expedition out to Long Point, which is truly the end of the road for Cape Cod. As we wrote about back on Wednesday evening, we found a breakwater during our trolley tour and we checked that our for a bit. We were intrigued and decided to go all the way across and go to the lighthouse that was near the breakwater.

We set out a little before noon with a picnic lunch and plenty of water.

But, before the trek began, we ended attend a wedding, albeit at a distance. As we approached the breakwater, we cut through the park where the Mayflower plaque is (we shot a picture that you can see in the trolley post). In front of the plaque, two couples were being married by a minister with friends and family in attendance. This was more than a commitment ceremony. Since this is Massachusetts, it was a legal same-sex marriage. We sat on a nearby bench and, while we couldn’t hear much, it nice to watch this joyous event. Congrats to the happy couples!

Off on our journey, we hiked over the rocky and uneven breakwater, over some dunes and ended up on the beach of Cape Cod Bay (as opposed to the beach of Provincetown Harbor, which is what we had in front of the Inn). The sand on those dunes was searing hot and quite coarse. Uncomfortable doesn’t justly describe how it felt. Jeff’s feet got burned and scraped and he was back in his sneakers as soon as there was a good place to sit down to put them on. Will, meanwhile, soaked his in the cooling water of the bay.

We saw nature in action too, seeing carcases of several fish that were picked clean by gulls. One of the carcases looked to us like a baby shark, but we’re not completely sure about that. We even came up on a gull actively working on a fish. Will didn’t let Jeff shoot any of this stuff, calling it a little bit too Discovery Channel for the blog.

We did finally get to the lighthouse after about 90 minutes in to our journey and we had lunch on the beach. Not much to see at the lighthouse since it’s on autopilot, but it was still cool to see one up close. We then headed back, going through the marshy part of the dunes to get back to the breakwater. The tide was coming back in and we had to navigate some rising water, but we made it back. We even ran into Kate Clinton, the comedian we’d seen the night before dining at The Red Inn. She said she was using the breakwater as a place to power walk.

For our last evening we had a wonderful dinner at The Red Inn… just the two of us. It was wonderful. 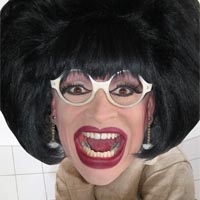 For the show, Miss Richfield doled out therapy to some needy audience members. It was great. She had to work pretty hard with a couple lesbians who really wanted no part of being on stage. She managed to pull it off and make some good comedy. We saw Lea DeLaria in the audience too along with her keyboardist.

It was a fun way to spend the last evening in town.

Friday was low key. We had a final brunch, at The Red Inn, with A.J. and Marc and then just bummed around town until we had to head off for the ferry and the trip home.

It was a fantastic trip! Now we have the weekend to re-acclimate to NYC before the work week starts again.