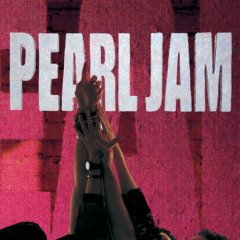 Pearl Jam’s debut album Ten turned 17 this week! This is one of those albums whose release I distinctly remember. It came out the same summer I’d graduated college, a big summer to be sure. I was blown away by the music. It was the first I’d heard of the new “Seattle grunge” sound (Nirvana’s Nevermind wouldn’t come out for another month still).

“Alive” was a great anthem the spoke about getting through life. “Jeremy” was a dark, foreboding song about a very disturbed student. “Black” was simply amazing: a perfect alchemy of music, lyrics and Eddie Vedder’s distinctive voice. Every song was rock perfection. It’s no wonder the Rock and Roll Hall of Fame put Ten at #11 on its Definitive 200 list, a list of albums that the Hall of Fame says should be in every music collection.

To this day, this album is in it’s entirety on my iPod (and there are not many complete albums on my iPod… not even the Rent original cast recording has that distinction).

I’ve remained a Pearl Jam fan over the years, but they never recaptured the magic of Ten. Vedder came very close though on his recent solo album, the soundtrack for Into the Wild.

I had the chance to see Pearl Jam in 1995. They played Golden Gate Park in San Francisco as part of the tour where they were shunning Ticketmaster. Unfortunately, the concert was cut short after just a few songs because Vedder was ill with food poisoning and couldn’t continue. The trip to the concert was one of the first (and maybe the first) Will and I took when we started dating… he was awesome with the trip. He got high marks for enduring the event since Pearl Jam was not his thing (which I didn’t know at the time). We did have a great time over the rest of the weekend though.

Here’s a little anniversary celebration of Ten: a fantastic live performance of “Black.”