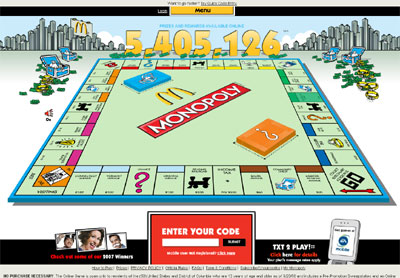 So here’s what I’ve been doing the past few months… Back in February I posted that I’d launched MainStreet, my first big project at Promotions.com. Now I’ve launched my second, and it’s actually something you may have heard of.

Last week, McDonald’s Monopoly game came online and this week commercials started running and Internet advertising kicked in as well. I’ve even started to see Monopoly McDonald’s bags here in NYC too. Currently the game is in a pre-mode where you can register and play a free code. Next week the game goes hardcore with the game stamps in stores and people getting down to the business of winning cash and other goodies.

This has been a great project to work on. I learned a lot and got to work with some technologies I hadn’t before, such as texting into the game using a mobile phone.

Monopoly is the largest project I have ever managed. Yes, I did site redesigns and major releases at The Princeton Review, but those pale in scope to the intricacies of putting this together (there are even two versions of the game, with one here and one in Canada). And, I’ve never had a project I’ve worked on end up in a TV commercial, so that’s pretty cool.

You can go check it out for yourself at PlayatMcD.com (or if you’re in Canada it’s PlayatMcD.ca). And if you eat McDonald’s between now and middle November, play that code on the Monopoly stamp!