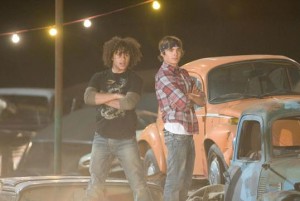 Wow! It’s been a long time since we’ve been to the movies (that would be Sisterhood of the Traveling Pants 2 back on August 10). What better way to inaugurate the fall movie-going season than with High School Musical 3: Senior Year.

Was it a good movie? Yes. Right in line with the expectations set by the other two. Was it worth the $12.50 ticket price? I’m not so sure about that, but I know I couldn’t have waited for DVD to see it. About the only difference between this and the Disney Channel movies was that there seemed to be a lot more students at East High.

Plot wise, the movie spanned the spring of the Wildcats senior year, picking up with the basketball championships and rolling on through the spring musical, the prom and graduation along with a healthy dose of everyone having to make their final decisions about where to go to college. No major surprises, but some small twists along the way keep it interesting.

Of course, the key thing here is the music and dance and there is good stuff here. I’ve been listening to the soundtrack on and off since it became available on iTunes on Tuesday. “Now or Never” is great with its upbeat basketball setting. “I Want it All” is the first time I’ve enjoyed a Sharpay song ever. “Can I Have This Dance” is a great Troy/Gabriella number as she teaches him how to waltz for the prom. “Just Wanna Be With You” is one of the spring musical numbers that is good. “The Boys Are Back” is loads of fun with Troy and Chad reliving their childhood playing in the local junk yard.

Remember “Bet It On It” from HSM2 and Troy’s angry stomping through the desert? Well he’s got a similar number here with “Scream.” This time though he’s stomping around the East High hallways, and looking a lot less silly while he’s doing it. At the end of the spring musical and during the graduation sequence we get a great “graduation mix” of “We’re All In This Together,” which was really good.

One song I didn’t like: “High School Musical” It didn’t thrill me when I heard it the first time on my iPod (in fact I removed it within hours so I wouldn’t run into it again) and I didn’t like it in the movie either. It’s a weak finale, especially since it caps the trilogy. It’s cheesy and lame.

I’m sure there’ll be a HSM4. In fact I think we got introduced to some of it’s characters with Jimmie “The Rocket” (perhaps the new Troy), Donny (new Chad) and Tiara (new Sharpay). We’ll see if that comes to pass… if it doesn’t it is kind of shocking how much screen time these three got.

Overall, a fun time and a great way to spend a Friday afternoon off of work.