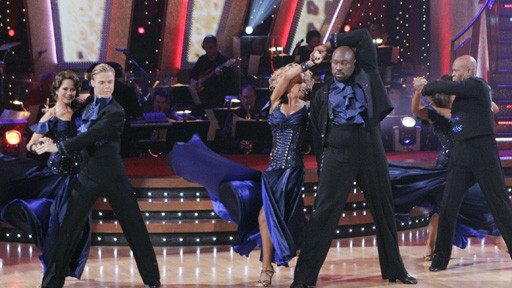 Let me cut right to the chase: The Team Paso Doble, the last number in tonight’s show, was stunning! Brooke, Maurice and Warren, along with their pro partners, delivered an awesome bit of dance. From the costumes, to the music, to the fierce and dramatic opening this was one of the best dances to ever come across the Dancing with the Stars stage. For the individuals in this dance Warren and Kym were incredible, as they proved they can be with their earlier paso; Brooke was strong with Derek as they passionately twirled around the room; and Maurice, while not looking so great himself had Cheryl working hard to make him look good (which made her stand out).

Meanwhile, Team Cha Cha Cha was a mess. Lance, Cody and Susan did not deliver. The group portions of the dance were messy, not helped by Susan who apparently can’t keep her steps in her head. The individual bits weren’t that great either, except for Lance. He and Lacey nailed their solo bit and saved the dance from being a complete disaster (I agree with Carrie Anne on that note). Cody and Edyta (his stand in partner for the week) were okay but not dazzling. Susan and Tony… we’ll Susan was not comfortable here and it showed big time as she seemed rigid through much of her solo.

Needless to say Team Paso Doble kicked Team Cha Cha Cha’s ass with the judges. The Paso got a 29 while the Cha Cha picked up a 20.

With the individual dances there was variety once again, and I didn’t always agree with the judges either.

Warren did a Fox Trot I thought was smooth, elegant and just a bit playful. But the judges didn’t feel that it was proper at all. I felt he was severely underscored.

Susan did a paso of her own that made me cringe. The judges praised her yet again for finally letting go, but I thought the dance looked strained and had Tony working overtime just to pull it off.

Maurice did a Cha Cha Cha that was his best dance to date. He looked good, and it seemed like he and Cheryl finally had a good time.

I also disagreed with the judges on Cody. I thought his Viennese Waltz was beautiful. Occasionally he seemed to lose the character of the dance, but I thought the choreography was solid and the performance top notch.

Lance shined again with a fabulous Rumba. Lacey delivered some excellent choreography and Lance performed it nearly flawlessly. Len didn’t like it though, giving it a 7 while Carrie Anne and Bruno gave it 9s. It’s rare to find a two-point discrepancy with the judges. I know Len said he didn’t like the choice to go barefoot or the bench or the gimmicks, but I thought it was great. Lance has really become a contender the past couple weeks and if Warren and Cody don’t watch out he might steal one of their slots for top three.

Brooke swept the night away with her Fox Trot. She said she was still having foot problems, but those weren’t apparent this week at all. It was simply gorgeous and moved me to a couple tears. It was a well deserved 30.

RESULTS UPDATE: Hooray! Susan has been eliminated. It’s about time. I was scared for Cody though after ending up in the bottom of the judges scoreboard. The Lionel Richie performances was good, especially “Dancing on the Ceiling” with Cheryl, Maks, Kym and Tony doing the dancing.

Next week will be interesting as the stars have to do a solo Latin number along with a ballroom routine.