Friday Geek Out: The Secret Garden 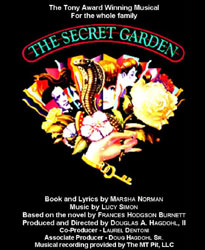 The Secret Garden opened on April 25, 1991, bringing the classic Frances Hodgson Burnett novel to life as a Broadway musical. The story focuses on an orphaned girl who moves in to a sad, dark household with a grieving uncle and stubborn invalid cousin. As Mary settles into her new home, she discovers a garden that’s been abandoned for years and works to bring it back to its former glory. At the she time, she reawakens the entire household.

This novel, often read around the same time as Little Women or Tom Sawyer for most children, is among the most successful musicals to be made from a book of that genre. The Secret Garden played for 709 performances while Little Women clocked in with 137 in 2004-05 while The Adventures of Tom Sawyer had only 21 performances in 2001. Having seen all three of those, I can tell you Secret Garden was far and away the best of three.

I saw the show in the summer of ’91 with most of it’s original cast. It was a stunning stage experience, especially the garden coming back to life. You couldn’t go wrong with the cast either: Mandy Patikin as the uncle, Daisy Eagen as Mary, Robert Westenberg as Mary’s other uncle, Rebecca Luker as Lily and a young (pre-Hedwig and the Angry Inch) John Cameron Mitchell as Dickon.

The show was nominated for seven Tonys, including Best Musical. Eagen won for best featured actress, becoming the youngest actress to ever win. The show also won best book and best scenic design.

To me this show was robbed of Best Musical and Best Score by The Will Rogers Follies, a show I’ve never cared for. The Secret Garden is loaded with great music, as you can tell by its Tony Awards performance above. It plays routinely in local theaters around the country. If it plays in your town, I highly recommend you go see it because it is simply sublime.