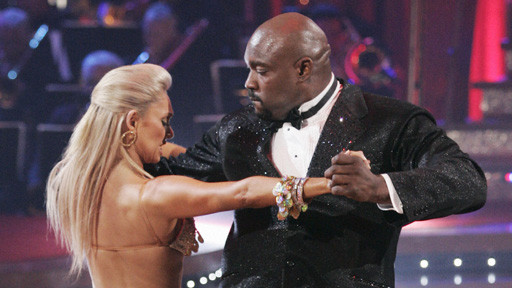 It was a two dance week for everyone on Dancing with the Stars. There was a twist though as each star had to do a solo within their Latin routine. Here’s a quick recap of everyone’s performances:

Cody: Ballroom: Foxtrot. I thought he had just a few missteps here, but it was elegant and charming. The judges seemed to underscore it, especially compared to the other scores given. Latin: Mambo. The solo here was a bit of mess with too many arcobatics and jerky moves. The rest of the routine I thought was quite good and fun.

Brooke: Ballroom: Tango. Wow! Absolutely stunning. One of the best tangos on any season. Derek really knows how to choreograph for Brooke. I thought Len was completely off  base giving an 8. Latin: Mambo. This really showed were Cody went wrong because this sizzled. The solo fit the dance and the choreography again was right on.

Maurice: Ballroom: Quickstep. This seemed slow and Maurice lacked spring in his step. On top of that he seemed very stiff, like he was overthinking his moves. Latin: Paso doble. Again, very stiff and over compensating on the moves. I didn’t care for either routine and I was stunned the judges praised like they did.

Lance: Ballroom: Foxtrot. Very smooth and well done. It had all the right steps, with the flair that Lance and Lacey bring to their routines. Latin: Samba. Also well done. I thought this was one of the best solos of the night because it fit in so well. The judges really didn’t score this high enough for how good it was.

Warren: Ballroom: Tango. Awesome (and pictured above)! He consistently wows in this type of dramatic dance. Absolutely incredible. I was glad it tied with Brooke’s. Latin: Jive. How fun with this? This man moved across the floor with a lot of fun. Who cares if the footwork was a bit off, the routine was fun and energetic and way better than some of the other stuff we saw (I’m talking Maurice right here!).

RESULTS: Hooray! We finally got rid of Maurice. I’ve wanted him gone for weeks and I’m glad that finally happened. The number Lacey did with her brother was really cool. It was fun to see her choreopgraphy really set loose. The Macy’s “Design-A-Dance” was the best thing of the night with Derek and Julianne dancing to “Great Balls of Fire.” I don’t know who chorpergrpahed that, but it was great! Julianne will be back with Cody next week too, and that’s good news.

Next week is the semi’s with Brooke, Warren, Cody and Lance. I’m still sure that Brooke and Warren will be in the finals. Lance and Cody are going to have to  battle it out though. Cody’s been slipping a bit and Lance is on the rise. Next week should be awesome!