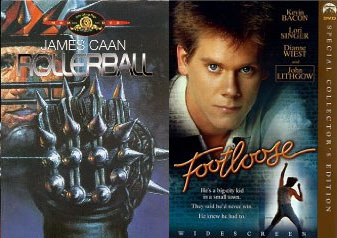 This headline greeted me on Playbill.com this afternoon: “Rollerball Meets Footloose in Dance Dance Revolution”

What’s not to love about that! Here’s a couple quotes from the arrticle:

“Inspired by the popular video game of the same name, Dance Dance Revolution, according to production notes, ‘is like Footloose set in the future — but much scarier, and with 40 really attractive, barely-clothed young actors as well as free beer!'” (One of those barely-clothed actors will be Van Hansis, Luke from As the World Turns.)

“Les Freres transforms the Ohio Theater into a fully immersive, bombed-out discothèque as it fuses unmerciful Japanese rave music with deeply regrettable sophomoric comedy in the futuristic dance spectacular, Dance Dance Revolution. Riffing on fizzy dance musicals like Flashdance and death sport movies such as Rollerball, Dance Dance Revolution is set in an Orwellian society where dance is illegal. A group of local street toughs harbor no hope of overthrowing the fascistic no-fun government — until a mysterious dance prophet named Moonbeam Funk arrives.”

The show plays the Ohio Theater in SoHo from December 3-20. I’m buying tickets this week because this can’t be missed!