Friday Geek Out: The Last Starfighter 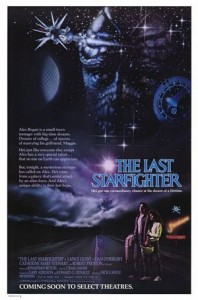 The Last Starfighter is one of my favorite sci-fi films ever. It taps right into that fantasy of being picked to go zooming up into the stars and fight an epic battle.

The film came out in the summer of 1984, just after I turned 16. It was just two years after Tron and I was psyched to see another video game movie. In many ways this was better than Tron because instead of accidentally getting pulled into the computer, it was off to a space adventure.

For those who don’t know the story, you’ve got Alex, a kid in a trailer park desperate to get out for college. He’s obssesed with The Last Starfighter game at the park’s office and while playing one night he breaks the high score, which triggers an emissary from the Star League to show up and wisk him away for training.

Only problem is Alex had no idea that the point of the game was to turn him into a real Starfighter. But how cool would it be to have that happen (heck, I’m 40 now and still think it would be a cool adventure).

The movie had cutting edge effects for the time, although it doesn’t look that way today. The effects actually hold this movie back from being able to be timeless. Star Wars effects from eight years before this hold up far better today than this movie’s. The early attempts at CGI were pretty cheesy then, but it worked because of the video game aspect of the story. 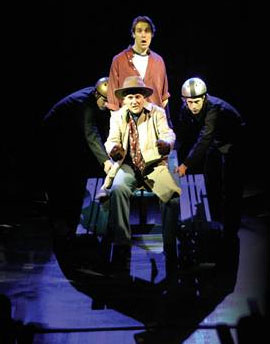 Believe it or not, there’s a also a musical version of The Last Starfighter. I caught the initial production in October 2004 (you can sample a bit of the music at Kritzerland, the company that released the cast recording.

As much as the film was cheesy fun, the musical was even more so. Sci-fi musicals aren’t common place, but this was cooler than I’d exepcted. It was very community theater, especially the spaceship, shown at right. (Yes, they are using a picnic table as the spaceship!) But the music was good and the story had the same big heart and adventure the film did.

The musical keeps having a life too. It got a staged reading at the 2006 New York Musical Theatre Festival and then at the 2007 festival it got a fully staged production. Unfortunately, I didn’t get to see the new production because it came and went before I was aware it was playing. I hope it crops up again sometime because I’d love to see how it has evolved since I saw it.

If you’ve never seen The Last Starfighter, give it a go. Even with the less-than-perfect special effects it is still a classic story!