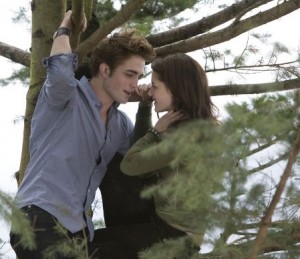 I was worried how Twilight would translate to the big screen, but after seeing it this afternoon I can say that I’m overall pleased with the result.

I did think the movie was a slow in the beginning. I feared it was going to be flat like the first two Harry Potter films where the filmmakers tried too hard to stick completely to the book. Within 20 minutes though, the film hit its pace and moved well turning Twilight into something more cinematic.

The important parts of the book were all there, but elements were opened up for the movie as well. For example we see James and his band of human-eating vampires up close and personal early on. We also see more of the final showdown with James.

I was also concerned with how the dialog between Edward and Bella would play in the film because there is a lot of it in the middle third of the book. This was my favorite part of the book and, while it was streamlined for the movie, enough of it was there to make me happy. The scenes of two in the woods, in the restaurant in Port Angeles and at Edwards house were perfect.

Kristen Stewart and Robert Pattinson brought Bella and Edward to life quite well. Edward’s inner turmoil and Bella’s infatuation/fear fit well with what I’d imagined from the book. I wish Bella’s thoughts could’ve been captured more, but admittedly that’s difficult in film. Stewart did a good job of portraying it with her facial expressions, especially with her eyes. I suspect if I had not read the book (and finished it earlier in the week), I would’ve liked the movie even more since I wouldn’t know what I was missing.

It all seemed to play well in the theater we were in this afternoon. There were several teen girls in the audience who squealed in delight as Edward and Bella fell more in love. No squealing here, but an enjoyable afternoon at the movies.