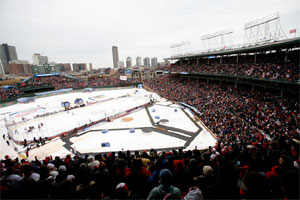 It was a great New Year’s Day for hockey. The NHL played the second Winter Classic this afternoon from Wrigley Field in Chicago. It was an awesome game with the Detroit Red Wings beating the home team Chicago Blackhawks by a score of 6-4. It was a nail-biter too because Chicago dominated the game in the first period and were leading 3-1 into the first intermission, but Detroit turned the tables around and owned the second and third periods.

I’ve been lucky that the first two Winter Classics featured my favorite teams (last year was the Pittsburgh Penguins taking on the Buffalo Sabers at Ralph Wilson Stadium in Buffalo). And, in both years, my teams won!

The Classic this year did not have the magical quality of last year’s game. It was hard to beat the emotional impact of a huge game of pond hockey played in the snow. This year it was still big pond hockey, but the weather was much more agreeable, making this a really awesome game  that just happened to be played outside.

Right after the Classic ended, I headed out to play three hours of my own hockey. I signed up for back-to-back scrimmages today and I had a blast. In the first scrimmage I played D, and did so pretty well if I do say so myself. I held my own against some pretty strong upper level players. Yes, some goals were scored, but it was a good time and good practice.

In the second scrimmage I came up and played center and managed to get myself a hat trick! It was three really nice goals too: 1) Was an empty netter because the goalie came way too far out of the net and I shot it in before she could back. 2) Was off a rebound from a defensemen on the blue line. 3) Was from a great centering pass from a teammate. I became a marked man by the opposing team, which never happens. It was a great way to start off my 2009 year of hockey.

I also neglected to blog last week about the Tigers. We won our game against the Polar Bears 2-0. It was a fun game. Both sides were short handed. We loaned them one of our players to help balance the teams. We only had three D for the Tigers and I loved that because it meant a lot of ice time. I tried to get a couple goals too, but was denied by their goalie a couple times and faked out by their defenseman another. It was still lots of fun! This week there’ll be Ronnie’s Ice, Tigers and Ordinals happening on Saturday!