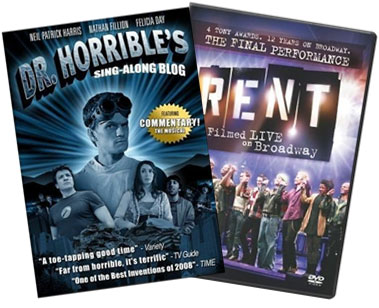 It’s been a great DVD month as I picked up copies of Dr. Horrible’s Sing-A-Long Blog and Rent: Filmed Live on Broadway. Both DVD’s are perfect for a cold winter’s night watching.

The Dr. Horrible DVD has been out for a couple months and I finally got around to picking it up from Amazon (where I believe it is on sale exclusively). Like any DVD, Dr. Horrible has a couple of commentary tracks. What sets Dr. H apart is that one of the tracks is a musical commentary featuring the Whedon brothers, the principal actors (Neil Patrick Harris, Nathan Fillion and Felicia Day) as well as a number of the cast’s supporting players. Yes, it’s Commentary! The Musical. This commentary track is worth the price of the DVD all on it’s own, especially Harris going all Sondheim towards the end of the track. There are some nifty making up features as well, but really after a musical commentary what else was really necessary? Of course, it’s great to own Dr. Horrible for it’s own brilliance as well. What started out as a Joss Whedon internet project born out of last year’s writer’s strike has really grown into quite the cult hit.

Meanwhile, it’s not a surprise at all that I picked up the DVD of Rent’s final Broadway performance as soon as it was released earlier this month. I saw the film when it was in theater’s in September and loved how they captured the musical. The DVD is just as great on the widescreen TV. The DVD’s bonus features just add to the poignancy of the show’s final Broadway bow. There’s an excellent look at the production’s last week, including interviews with the cast, crew and Jonathan Larson’s parents. This also has a look at how the production was filmed (both in front of an audience and without an audience). There’s also a look at the final lottery and at the wall of signatures and messages there were inside and outside the theatre. (There are more special features on the Blu-Ray version of the disc, which I think is a really tacky marketing ploy to try and get people to upgrade to the newer disc format.)

I’m glad this got released on DVD. Too often these “special events” don’t get a release. Now the magic that is the stage show can be enjoyed by fans for years to come (I am a fan of the movie and love that the original cast got to do that, but the stage show will always be the definitive way to see Rent).