Just a few things to say on last night’s ceremony (which, in all honesty, I watched most of in about a half hour this morning courtesy of the DVRs fast-forward): 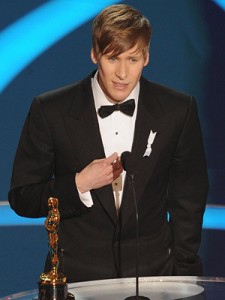 Milk screenwriter Dustin Lance Black said this at the end of this acceptance speech for Best Original Screenplay:  “But most of all, if Harvey had not been taken from us 30 years ago, I think he’d want me to say to all of the gay and lesbian kids out there tonight who have been told that they are less than by their churches or by the government or by their families that you are beautiful, wonderful creatures of value and that no matter what anyone tells you, God does love you and that very soon, I promise you, you will have equal rights, federally, across this great nation of ours.”

Queen Latifah’s beautiful rendition of “I’ll Be Seeing You” during the In Memoriam section.

The sparkly stage proscenium. I wish I could find a picture to post because it was gorgeous.

The rest of the show was okay from what I saw. Hugh Jackman’s opening number was cute and funny. I particularly liked the fact that he was close to cracking himself up. However, the “big” number that he worked on with Moulin Rouge’s Baz Luhrmann was a mess. Jackman, Beyonce, Zac Efron, Vanessa Hudgens, Amanda Seyfried and Dominic Cooper all gave a good performance, but the song selection and transitions were bizarre at best.

As for the winners… I was glad to see Sean Penn get the upset over Mickey Rourke and Kate Winslet to finally win. Heath Ledger’s family had a quiet dignity about them. And I’m still a bit embarrased that I haven’t seen Slumdog Millionaire yet.