Friday Geek Out: Night of the Comet 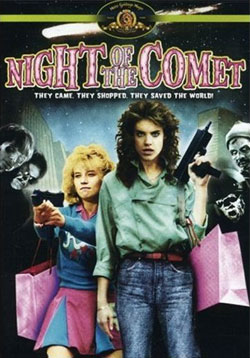 Here’s a massive dose of 80s flashback for Friday: 1984’s Night of the Comet. I didn’t see this in the theater, but did see it a lot when it hit cable TV. It’s one of the funniest end-of-the-world movies ever. A friend recently brought this movie up (thanks, Stephen) and I had to put it out here as a Geek Out.

The premise of this flick is a hoot: one night, the Earth passes through the tail of a comet and everyone who wasn’t inside a enclosed metal structure is vaporized… or worse, those who were partially protected turn into zombies! Who is left to save the day? Two valley girl sisters (one survived in a movie theater projection booth while the other was in a metal shed), of course. But, they can only do the save the world thing after the do some major shopping.

You’ll see from the trailer below exactly the kind of 80s movie this is, which is going to force you to add this to your Netflix rental queue because you’re really not going to believe the craziness. Looking back on this now, I believe it really wanted to be something like Shawn of the Dead… instead it really is just silly.

Fans of bad movies can also take notes that Catherine Mary Stewart is the heroine of this film. Night of the Comet came just four years after her stunning musical, The Apple. There’s also Robert Beltran, Chakotay from Star Trek: Voyager, as a fellow survivor (he spent the night in the trailer of his semi).

So check out the trailer and relish in this good bit of geeky sci-fi comedy!