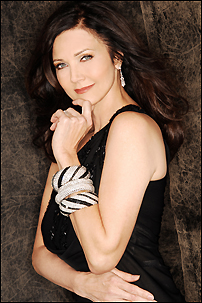 Will saw the ad in HX last Saturday while I was at hockey and as soon as I was home he said we had to get tickets. I barely had my sticks put away before I was on the computer to get tickets to tonight’s Lynda Carter concert at Jazz at Lincoln Center’s Allen Room.

The 90 minute show was great. Carter’s song list was full of jazz, blues and bits of country, rock and roll and disco. She mostly stuck to standards though, songs like Carole King’s “Up on the Roof” (very appropriate given that the room overlooked Central Park), the Supreme’s classic “Where Did Our Love Go,” the Harold Arlen/Johnny Mercer song “Blues in the Night,” Patsy Cline’s “Crazy,” Etta James’ “At Last” and others.

A stand out moment was when she brought up her back up singers to do “Chattanooga Choo-Choo” with some terrific harmonies. She also did an encore of Lennon and McCartney’s “In My Life” that raised some goosebumps for me.

Carter looked wonderful,  better than she looked on Smallville in 2007 or in Sky High in 2005. At 57, she seems to be having a great time out on the road touring to support the CD that’s coming out this spring. And, of course, she talks just a little about her superhero alter ego too, which was fun (she showed off a Wonder Woman bobble head and Wonder Woman Barbie). 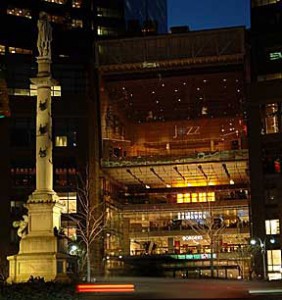 I have to talk for a moment about the concert hall too. We’ve never been to this newest of the Lincoln Center facilities, which opened in October 2004. The Frederick P. Rose Hall is home to the 1,233 seat Rose Theater, the 483 seat Allen Room and the 140 seat Dizzy’s Club. The facility is located in the Time Warner Center at Columbus Circle.

The Allen Room is intimate and spectacular. The image at left shows the outside of the building with the 50 foot by 90 foot window as the stage’s backdrop so Carter performed against the New York City skyline and Central Park. This room has been featured a number of times on Live at Lincoln Center on PBS and Ellen DeGeneres has done her talk show from here a time or two.

The acoustics were incredible. We’re very lucky see and hear concerts in some of the best concert halls–Radio City Music Hall and Carnegie Hall. And now we’ve been here. I hope we find an artist worth going back for so that we can enjoy the music and the view all over again.