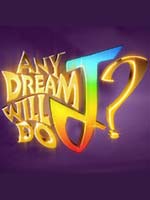 Nearly two years after it premiered in the UK (and no doubt after the winner has already left the show), we got to see the opening episode of Any Dream Will Do. The competition show is looking for the next star of Joseph and the Amazing Technicolor Dreamcoat. The show aired on BBC America last night and the opening episode was very engaging as thousands auditioned for the role of Joseph and then were whittled down to a group of 100, then 50, then 25 and then 15.

The question now is can the show be entertaining like MTV’s Legally Blonde The Musical: The Search For Next Elle Woods or will it suck like NBC’s Grease: You’re the One That I Want?

I’m  hoping for the former. I loved the Legally Blonde show and the opening of Any Dream Will Do pulled on the heartstrings as they really knew how to amp up the drama. I’ll be back next Sunday night to see how that goes.