Life in the Bike Lane 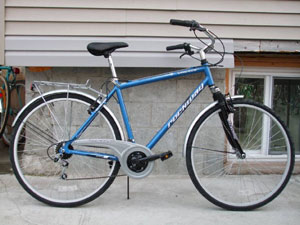 I bought a bike today.

I did this partially in response to the MTA’s announced increases in subway fares that are supposed to take affect at the end of the month. The cost of a monthly pass is set to jump from $81 to $103, which is the largest increase I’ve seen in the 10 years I’ve lived here (when Will and I arrived in New York in December 1998, the cost was $63 per month). So for the cost of two months of subway fare I now own transportation.

Of course, a bike is also great for fitness. It’s about five miles to the office, so that’ll be approximately 10 miles a day with most of the ride occurring along the Hudson River bike path where there are minimal stops. I won’t ride on rainy days or icy days, but I expect to bike to work at least three days a week (and hopefully more). Plus, I’ll ride to the rink too, which is about a six mile round trip. I can see going many other places on the bike too as NYC has been laying down a bunch of new bike paths.

One of the guys I work with rides to work from Queens (which is about six miles, one way). Ed became the bike guru over the past couple weeks, helping me figure out what kind of bike I should get and telling me about what his commute is like. He also pointed me in the right direction on Craigslist to find the bike you see pictured. Thanks, Ed!

So the commuting should begin the week of the April 13. Between being in Chicago for the bulk of the work week and still needing to pick up a helmet and some good locks, I don’t think I’ll get much riding in next week. The good news is I’ll be starting to commute via bike the same week my current monthly Metrocard expires. I’m excited about this new commute… and I’m sure you’ll be seeing me write about it a lot.