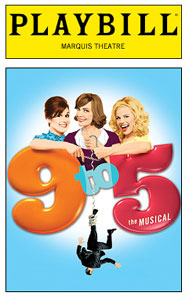 We’ve been looking forward to 9 to 5: The Musical for a few months now and we finally got to see it this afternoon. The verdict: It’s a lot of fun… just like it’s motion picture counterpart.

Dolly Parton crafted several new songs from the production and also dipped into her own music library (an expanded version of the title song as well as “Backwoods Barbie,” for example). The show’s book was written by Patrica Resnick, who wrote the original film. There are some nice additional plot points not in the film: a love interest for Violet, a new spin on Roz as well as some general tweaking to the action to allow the story to fit better on the stage.

The cast is fantastic! Allison Janney (from The West Wing) is Violet. Stephanie J. Block (Grace O’Malley in The Pirate Queen, Liza Minelli in The Boy from Oz and most recently Elphaba in Wicked) is Judy. Megan Hilty (recently Glinda in Wicked) is Doralee. Marc Kudisch (a Tony nominee for Chitty Chitty Bang Bang and Thoroughly Modern Millie) is Franklin Hart. They each play these familiar characters well, while still putting their own spin on them. Here’s a look at the cast of 9 to 5 in action.

Parton did a great job with the music. There are some that sound like typical Parton songs and others that show she’s researched Broadway tunes to know what’s required.  She gave Judy the song of the show with “Get Out and Stay Out,” a song she sings when she throws her ex-husband out after he tried to get her back. Here’s a clip of Block at her belting best!

Parton gave Violet a chance to be “One of the Boys.”

Janney is the weaker voice in the group. It’s not too noticeable when she’s on her own, such as the above clip. When she’s singing with Hilty and Block though her voice doesn’t quite fit. In the long run, it doesn’t matter because she acts the hell out of Violet and her closing speech in front of Consolidated’s CEO is fantastic.

I have to single out the choreography from Andy Blankenbuehler, last year’s Tony winner for his work on In The Heights. “9 to 5” had some great moves. Judy’s marijuana hallucination, “The Dance of Death,” was outstanding. He’s definitely going to get another nomination and I wouldn’t  be surprised at another win.

The show does suffer from Jekyll & Hyde set-itis. What does this mean? The sets move at the strangest times, in the middle of songs and before scenes are fully over. It’s slightly distracting and really unnecessary since set pieces could move during applause with some underscoring. We first noticed this in J&H and haven’t seen it used to the degree that 9 to 5 uses it in years.

I have to say the audience was a bit odd too… as if some segment had never seen the movie. There were gasps over certain points that are directly out of the film, such as Roz overhearing the girls in the restroom. When Roz’s feet were came into few, several people sounded shocked. I’ve also never heard scenery get applause. When the copying machine rose up from the floor, the audience was very excited!

Overall, we both had a fab time with this show. It’s a fun, solid show that I suspect will get tightened even further over the next couple of weeks before it opens on April 30. 9 to 5 is a show that will be around for a long time. This afternoon’s full house loved the show and I think, regardless of the critical opinion, the name recognition and fun factor will keep this show running for years.