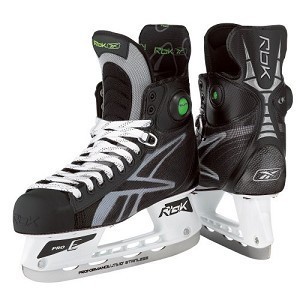 With no games this week, it was the perfect opportunity to use the ice time to break-in the new skates. The last time I broke in skates was June 2006, just ahead of going to Montreal for the Outgames. The new RB 9K skates finally showed up last week after taking a few diversions on the UPS truck. Thursday I visited West Side Skate during an extended lunch period and got them baked and sharpened. They also recommended a set of inserts to help correct for my flat feet, which turned out to be very helpful.

I wore them first at Ronnie’s Ice yesterday morning. The first hour was kind of hellish. There’s really no sitting down during the hour of drills so all 210 pounds of me was settling into the skates. Plus, being very freshly sharpened moving correctly was a bit of a challenge. But, by the time we hit the scrimmage things were feeling better and I was able to be off my feet for a few minutes at a time too.

Tonight I wore them again for an NYCGHA scrimmage. I’m happy to report that the break-in continues to go well. They are still super tight, but in a new shoe kind of why rather than a damaging the foot kind of way. As the scrimmage went on, I actually stopped thinking about the skates and just got down to playing.

The inserts West Side recommended are great. My foot, especially my left one, has never felt so good in a skate. There was always usually a bit of pinching near the arch just before the heel. That’s why West Side tried them in the skates right after the baking to see how it felt. It was an immediate improvement.

Now with three and a half hours logged on the new skates, I’m confident that I can bring the old skates home and leave them here for when outdoor skating season starts up again this fall. Then I can just keep the old ones at work for Bryant Park skating and the new ones always at the rink.

Next week, of course, is the big test with the at least two games to get through.