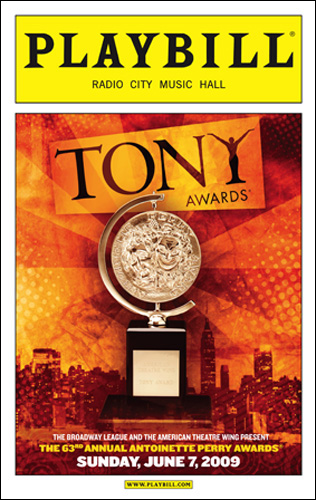 Billy Elliot walked away with the night winning 10 of its 15 nominations. I was hoping it would share more of the Tony wealth with Next to Normal, but at least N2N came out with 3 including Best Actress for Alice Ripley and for Best Score. And three awards does tie it with God of Carnage as the second most honored show of the night.

For my predictions I had a mediocre year with 13 of 27 correct (you can see the predictions and winners on Friday’s post). Of course the place I faltered the most was pulling for N2N to best Billy. It’s possible there could have been a Wicked/Avenue Q upset, but that wasn’t to be and the bigger (and, don’t get me wrong, very good) Billy won out.

As for the show, overall I didn’t like it. The road shows are good, but this is about the current Broadway season we didn’t need to burn off time on Mamma Mia!, Legally Blonde and Jersey Boys. Of the three, at least Jersey Boys was interesting becuase they had five Frankie Vallis there so that made it more interesting than trotting out “Dancing Queen” and “So Much Better”

The opening number was also a mess with the transitions. Remember the number at the Oscars were Hugh Jackman and company tried to get through all those movie musicals? This was the same sort of mess. Who thought pairing Pal Joey and Next to Normal was a good idea? Stockard Channing singing “Bewitched, Bothered and Bewildered” and Aaron Tveit signing “I’m Alive” just don’t go together. Do I need to see Bret Michaels singing from Rock of Ages? It was, however, nice to see Elton John performing with the Billys and Dolly Parton with the 9 to 5 gang. But the cons far out numbered the pros in this number.

The plays were short changed more than ever this year. No time was spent on the play revivals, short of giving out the award. For the new plays, each got about 60 seconds to showcase its nomination. Year after year the plays seem to get fewer and fewer minutes of the telecast even though there are as artistically important as the musicals. I continue to hope that some  year the broadcast will figure out how to rectify this.

Among most of the winners, it was all about rattling off names. The telecast’s producers are right that you should get up there and say something from your heart rather than a string of names. This year, more often than not, it seemed all about names. Among the best speeches: Karen Olivo, Geoffrey Rush, Angela Landsbury, Alice Ripley and the boys from Billy Elliot. Among the worst: any time a producer spoke.

Among the musical’s strutting their stuff I thought Hair (nothing like a good shot of energy in hour three), Next to Normal (showed off Alice Ripley’s tragic character great), Billy Elliot (one of my favorite numbers in the show) and West Side Story (nice to see something from them instead of  “America”) all put out great performances. I would like to know how the three Billy actors decided which one of them was going to perform. Meanwhile, Shrek, Rock of Ages and Guys and Dolls didn’t inspire me to go see their shows.

Here’s a look back at my Geek Out Tony picks with their Tony Performances.

One last note on the show, Neil Patrick Harris was a great, and very under utilized, host. He finally got to sing at the very, very, very end of the show. Here’s his fun and witty performance, with lyrics written by Hairspray composers Marc Shaiman and Scott Wittman.

And, for a slightly different take, check out Marc over at Deep Dish…