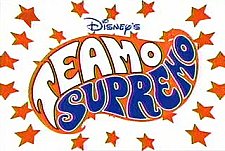 Teamo Supremo was a Disney cartoon developed for ABC’s One Disney Saturday Morning cartoon block. It premiered in January 2002 and lived part of it’s live on ABC and had re-runs, along with a handful of originals on Toon Disney. In all, 39 episodes (with 75 stories) were aired.

The show had a cool premise: three elementary school-aged kids were superheroes often called on to save their state from evil.

Crandall was Captain Crandall. He was positive he was from an alien world and was sent to Earth to protect it. His arsenal of gadgets included a yo-yo, a special level seven belt, marbles, boomerang and a shield. On Crandall’s team were Brenda (a.k.a. Rope Girl) and Hector (a.k.a. Skate Lad). Brenda was a Japanese girl who spoke with a Southern drawl and could do amazing things with her jump rope. Meanwhile, Hector was an ace on a skateboard and had a jet powered board to help the team get around. 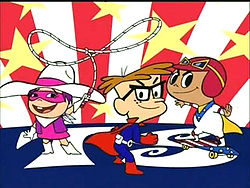 These kids met all kinds of villains as they worked with Level 7 to help stop evildoers. Among the best of the baddies was The Birthday Bandit, voiced by Mark Hamill who would rob birthday parties and The Synister Stylist who was a former soap opera actress who wants to give bad hair to everyone since she’s been so humiliated by  hers.

Since this was a Saturday morning network show, there was a good bit of learning to be done as the trio learned how about teamwork, trust, right and wrong, diversity and all sorts of other appropriate material. This show worked so well for me becuase it had clevar writing and some pretty cool take offs on spies and superheros did.  There was a time during 2002 when this was part of a ABC Kids block that it would air alongside Kim Possible, another Geek Out favorite that also had the spy show motif.

Here’s a the episode “Duly Deputized Super Agents,” when the kids started helping out the governor.

Now if only Disney would put these out on DVD (or bring them back to one of their channels)!