The Ride: The Accident…

This week is the seven month anniversary of starting to ride a bike as my preferred method of commuting. Last night on the way home I had a milestone that I could’ve done without: my first accident.

I was just a few blocks from work, riding down 5th Avenue as I’ve been doing for a couple months now. As I went through the intersection of 31st Street and 5th, I got hit on the left shoulder by an M5 bus (for you non-New Yorkers that’s the New York City Transit Authority’s bus that runs the 5th Avenue route).  I went down to the pavement, landing on the same shoulder I’d just been hit on as the bike went spiraling out from under me. A friend who has been riding the city street’s longer than I have suspects the bus’ mirror clipped me.

Luckily on the scene was a cabbie who was paying attention to his surrounding and didn’t run me over (and actually provided some cover to keep other cars from doing the same). He and his fare tried to find the bus’ number so that I could report it. Unfortunately the bus moved along too fast. There was a very nice pedestrian who came out and helped get me and my bike out of the road. Plus there was a mounted NYPD officer on that corner who assisted. He thought it was the cab that got me–he didn’t see the crash actually happen, but given the position between me and the cab I get why he thought that.

I have to give major thanks to the officer. He made sure I was okay. He was willing to get me an ambulance if I needed it (I passed on that). He helped me get my bike rideable since the handle bars had gone wonky and the chain had come off. Unfortunately, since no one was able to get the bus’ number he couldn’t do a full report on it. I wish I’d thought to write down his badge information because I’d like to give him kudos to his supervisors.

As for me, I’m scraped pretty significantly on my left arm becuase I was just wearing a t-shirt last night so there was nothing between me and the pavement. My left knee is also scrapped and I’m amazed I didn’t rip my sweats given how much skin came off my knee. My left shoulder hurts and is pretty stiff. I’m trying to decide if I need a doctor or not. I’m sure it’s not broken since everything moves and the pains aren’t sharp. Sleeping last night with all these injures was not too successful that’s for sure. And, of course, I’m trying to figure out if I’m in playable condition for hockey tomorrow.

The bike seems to have held up well. As I mentioned, I had to straighten out the handlebars and get the chain back on. My front reflector shattered and I lost my water bottle because it rolled away. One of my baskets is bent, but apparently still usable. I did ride  home, albeit slower than usual. I’m going to take the bike into the shop this weekend and have it checked out to make sure it’s as okay as it seems.

I was certainly lucky. I could’ve been clipped by the bus and then run over by something else. While I’ve enjoyed the speed I can move on 5th Avenue, I’m reconsidering whether or not to stay there or move back to one of the bike laned streets. It’s much easier to dodge pedestrians than buses that you can’t see coming up from behind you. 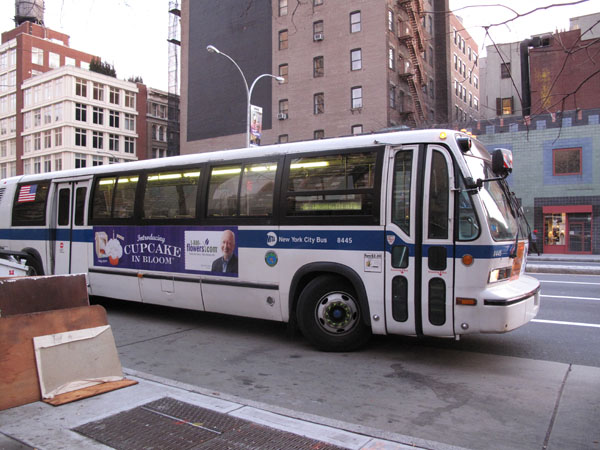