The Vast Fields of Ordinary by Nick Burd 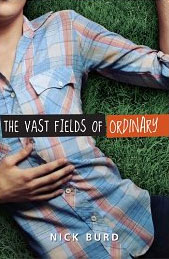 “When you say that things are fine so much, it sounds like a lie,” — Alex to Dade.

That’s just one of the lines that gets to the heart of the characters in Nick Burd’s debut novel The Vast Fields of Ordinary, a book that’s among the finalists for this year’s Lambda Literary awards in the LGBT Children’s/Young Adult category. Burd is very deserving of the nomination becuase this novel is far from ordinary.

Dade is a typical senior in high school and the book follows him from his last weeks of school through the summer before he’s off to college. He’s gay, but has only managed to tell the ceiling fan and other inanimate objects in his room that information. He’s messes around with Pablo the football star, but Pablo hardly acknowledges his existence otherwise and is certainly not boyfriend material. Dade is not one of the popular kids even if he is occasionally tolerated by them. To add to his problems, his parents’ marriage is falling apart. In fact he’s the first to find out that his dad is cheating on his mom.

Luckily summer takes a turn when Lucy arrives from LA to visit relatives who happen to live down the street. Lucy brightens up Dade’s world, getting him out to a local gay bar he never knew existed and helping him get over Pablo. Then Dade meets Alex. Even though Alex has a lot of bad boy characteristics, he’s exactly what Dade needs.

The Vast Fields of Ordinary reminded me of a great John Hughes movie–think Sixteen Candles or The Breakfast Club. There are characters you immediately relate too and root for. There are some pretty outrageous things going on (like a wildly out of control house party). There’s a fair amount of heartache too as Pablo struggles to come to terms with who he is … and there’s the town’s obsession with a girl whose gone missing.

My favorite sequences in the book are with Dade and Alex getting to know each other. Dade getting up the courage to ask Alex to dinner to meet his parents, and that subsequent meal is nerve racking. You want everything to go just right for Dade, even though you know it won’t. The quiet moments between Dade and Alex are so perfectly written capturing that unsureness of a new relationship. It is quite outstanding.

The ending threw me for a loop. As I got into the final 40 or so pages I had in my head how this story was going to end. I was wrong. Burd took the story down a different path. While it was a disturbing turn, it made the story all the stronger.

I’m already looking forward to whatever Burd writes next.

Up next: How They Met and Other Stories by David Levithan