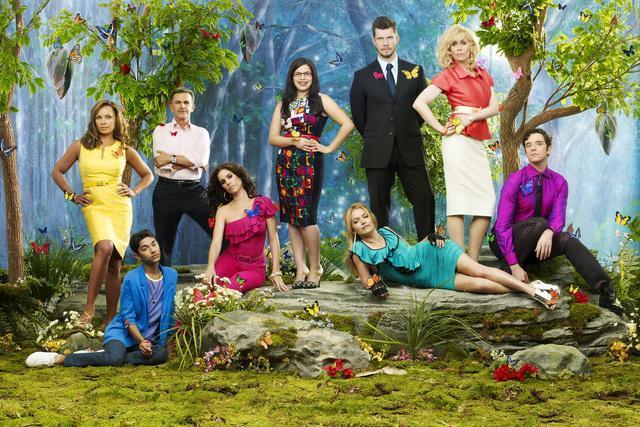 I met Betty Suarez on September 28, 2006 and immediately fell in love. From the start, Ugly Betty has been appointment television. Tonight, after four seasons, ABC airs the final episode and I will mourn this series passing as it was a bright spot in a TV landscape that is too often littered with programs that merely go after the lowest common denominator.

Betty gave proof that you don’t have to go with the heard to succede. From her first day at Mode magazine, she’s done things her way and helped those around her figure out more about themselves. Sure she’d falter from time-to-time, but she always found her way back to her true self and what she should be doing in her life.

Here’s a look and some characters and events that made Ugly Betty so good over the years:

1) Delicious melodrama: Who killed Faye Sommers? This early plot line was a clue to how over the top Betty could be. And then Wilhelmina Slater helped bring Alexis Meade back into the picture. Who is Alexis? That’s the Meade son who used to be Alex. Talk about a drama… she tries to take over the company with Willie, but then falls back in with her family. Even this season we’ve seen Willie go through ups and downs with her daughter AND once again try to take over the Meade empire.

2) Marc and Amanda: Always good for comic relief (reminding me initially of Karen and Jack on Will and Grace) these two quickly became so much more. Yes, the tormented Betty early on–and still do. But when they needed to, they were there for Betty. They also proved to be very smart characters too. Marc went on to become an editor. Amanda got out from behind the reception desk. Marc also had real heart as he took Justin under his wing early on when it was clear that Justin might need an ear from time to time.

3) Justin: From the beginning, it was no doubt clear to viewers that Justin was gay, even though Justin didn’t officially come out to himself earlier this season and to his family just last week. Justin performing Hairspray on a stranded subway train for Hilda, his mom, and Santos, his recently-back-in-his-life-father, was a sign of things to come. It was capped off this past week with Justin dancing with Austin at his mom’s wedding to Bobby.

4) Hilda’s grieving Santos: The surprising end to season one had Santos gunned down in a convienance store robbery. Hilda found out at the very end of the episode. As season two opened , Hilda and Santos are shown together, but by the end of the episode you realize that Hilda is talking with a ghost as she tries cope with the loss of the man she’d just begun to know again. These episodes were a clear sign of how Betty planned to hug heart strings over the years.

5) New York! The show has always been set in New York and they even filmed the pilot in the city, but the first two seasons of episodes were actually shot in L.A. For season three the show packed up and moved to NYC and they made great use of the city. Not since Sex and the City has New York looked so good on TV. For me, the Woolworth Building will always be the home of Mede Publications.

6) Mode Photo Shoots & Fashion Week: The episodes where there are photo shoots are always full of hilarity. From this season’s shoot at the Guggenheim with the million dollar bra to the out of this world shoot in the Rose Planetarium to the trek out to the Bahamas, over the years the Mode photo shoots are always crazy, insane and a delight to watch. Fashion Week is a photo shoot on steroids. This year they rolled out Clarie’s other son as a model. In the first year it was the debut of Alexis Meade arriving to take over the company. The Mode show is always a VIP ticket.

7) Betty: At the core of everything is Betty. She’s an inspiration in how she lives her life. As I mentioned above she’s always trying to stay on course and live her dreams while keeping an eye on what’s important–her family, her friends, and her standards.

8) The Cast: This show has the best ensemble: America Ferrera, Eric Mabius, Tony Plana, Ana Ortiz, Becki Newton, Mark Indelicato, Michael Urie, Vanessa Williams and Judith Light created 83 great hours of television. I wish it could have been more, but I’m glad I was able to spend the time I did with the characters these actors created. Well done!

See also the wonderful “Ugly Betty: Why it Mattered” from Tanner Stransky at Entertainment Weekly.